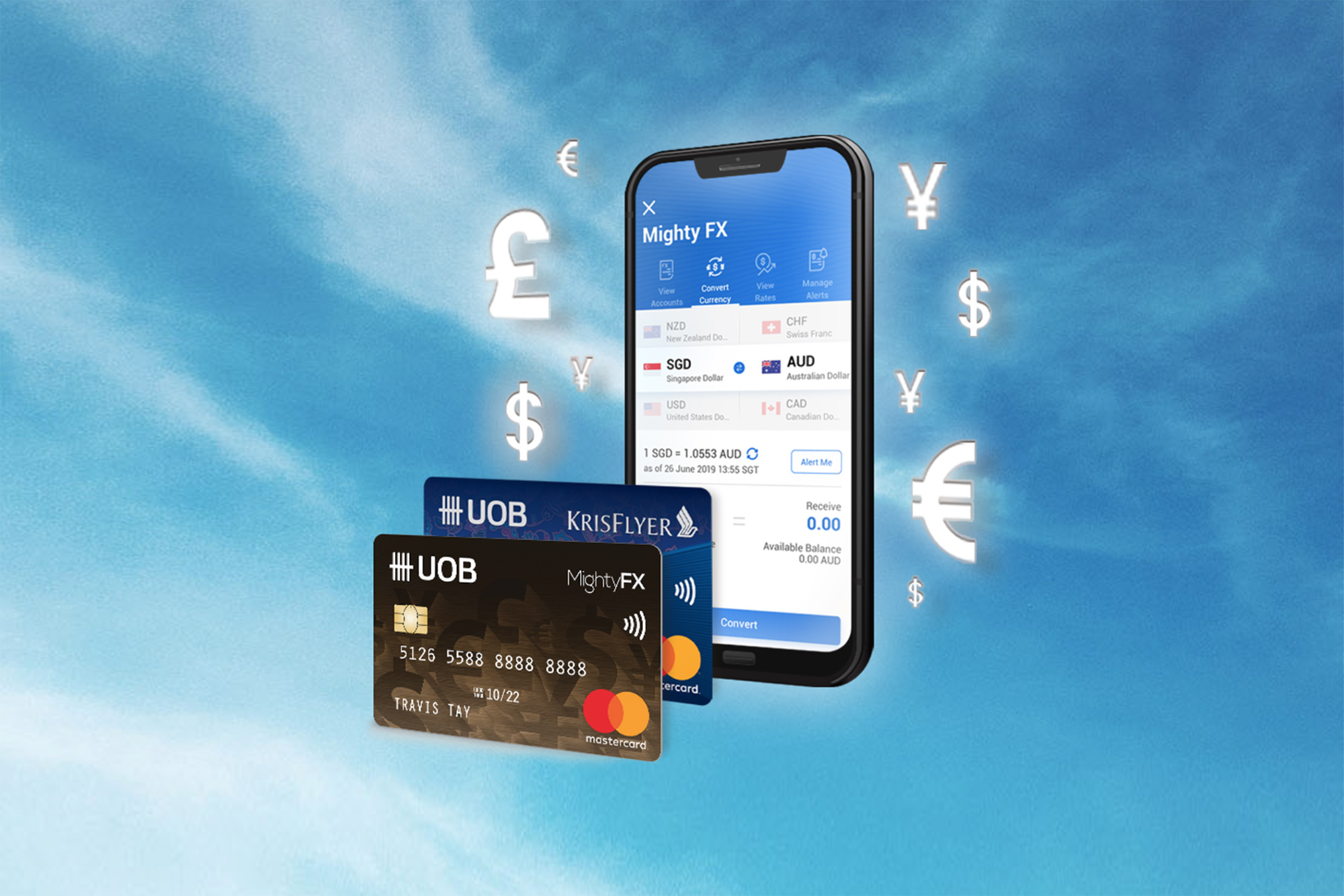 This article was written in collaboration with UOB. All views expressed in this article are the independent opinion of DollarsAndSense.sg.

Singaporeans are among the most well-travelled in the world. This should not come as a surprise – many of us venture out of our little red dot to explore new places and escape the hustle-and-bustle of city life, as well as to seek out business opportunities for work.

For frequent travellers, it is not only important to know how we can get the best travel deals, but also what are the best (and most convenient) ways for us to convert foreign currencies.

For busy people who travel often, hunting for attractive exchange rates at well-known money changers at People’s Park Complex or The Arcade at Raffles Place will take too much time or just not be worth the trouble.

Travellers now have the option of converting currencies on a wide selection of online platforms developed by banks as well as emerging fintech players. These digital platforms offer greater convenience but at the same time, some present a plethora of choices that may be confusing for the uninitiated, who have to grapple with different fee structures, subscription tiers and more.

Read Also: We Planned Our Company Retreat In Vietnam: Here’s All The Apps And Tools We Used

If you want convenience and simplicity without needing to compromise on getting attractive exchange rates, then you would not want to miss out on the UOB Mighty FX feature found within the UOB Mighty app. Here’s why.

#1 Convert At Your Convenience

One of the biggest advantages that UOB Mighty FX users enjoy is the convenience it offers.

If you have a UOB deposit account such as the One Account and use mobile banking for your banking transactions, you would have already downloaded the UOB Mighty app. The Mighty FX feature sits within the app, so you would not need to download a separate app, unlike with many other multi-currency wallets out there.

You can apply for a Mighty FX account online with just a few clicks, and once your account is open, you would be able to start converting currencies right within the UOB Mighty app in a matter of seconds.

It is worth noting that Mighty FX offers true 24/7 convenience. This is unlike money changers, which have operating hours or may even run out of particular currencies at times. Not all digital currency conversion platforms can offer this level of convenience either. For instance, some may charge conversion fees during the weekend, an inconvenience you would still have to plan around.

Nobody wants to use an app which is going to be too difficult or take too long to learn. In this aspect, Mighty FX does not disappoint.

Not only is Mighty FX intuitive to navigate, it allows you to set alerts for your preferred exchange rates or make conversions automatically at those rates, so you don’t have to keep monitoring currency movements.

What’s more, Mighty FX is mighty straightforward – for instance, it doesn’t limit how much you can convert and how much you hold in your foreign currency accounts. This is unlike other platforms which may have caps because you do not have a paid subscription or because they operate using personal mobile wallets that are subject to limitations on how much they can hold. 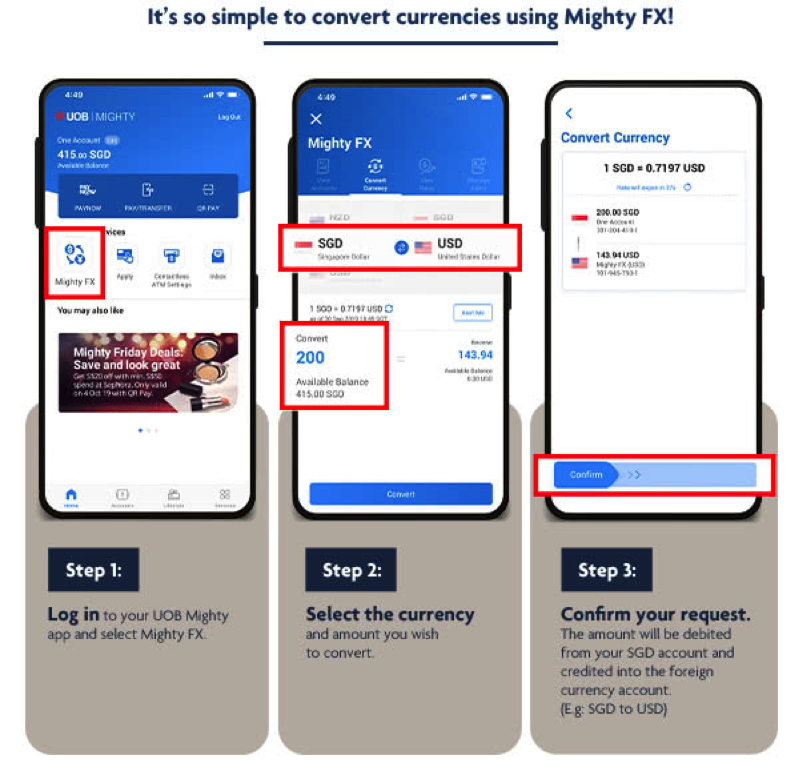 Mighty FX offers very competitive rates that are even better compared to some traditional money changers at popular locations. As an added bonus, Mighty FX has an ongoing promotion offering special rates on specific currencies every Friday until the end of 2019 – you can keep a lookout for these on the Mighty FX website.

Mighty FX rates are also transparent, all the time.

What you see is what you get. As mentioned previously, you will not have to contend with extra fees when you convert on weekends or to particular currencies. You will not be charged additional fees if you convert more than a certain amount. The same cannot always be said for some of the currency conversion offerings out there, which tack on extra fees that effectively increase the cost of your currency conversion, over and above the exchange rate you see.

As a service that sits within the existing UOB Mighty app, Mighty FX is linked to UOB deposit accounts* such as the UOB One Account, KrisFlyer UOB Account and UOB Privilege Account. What this means is that when using Mighty FX, you can be assured of the same bank-level security that you have for all your online banking transactions.

#5 Save Money Even When You Pay

Getting a good foreign currency exchange rate is just one aspect of making sure you are a financially savvy traveller. You have to also make sure you pay for your overseas spending in a cost-efficient manner.

Paying in cash whenever you travel overseas is a poor way to avoid paying fees on card spends, since it is not only inconvenient but also poses a safety issue, especially for larger ticket purchases. As a Mighty FX user, you can pay for your overseas spending using the Mighty FX Debit Card or the KrisFlyer UOB Debit Card without being charged admin fees on your spends. The overseas spend will be directly debited from your Mighty FX foreign currency account without any additional fees.

In other words, we are 1) getting favourable rates and 2) not paying anything extra for cashless transactions made overseas.

Again, it is worth noting that spending using your Mighty FX Debit Card does not come with any caveats. Unlike with some other platforms, you won’t be charged extra fees for spending over a certain amount each month.

And if we do need cash overseas, such as at shops that do not accept cashless payment methods, we can withdraw cash from Mastercard-enabled ATMs using the Mighty FX Debit Card or KrisFlyer UOB Debit Card. Each overseas cash withdrawal comes at a flat fee of S$5 or its foreign currency equivalent.

For this year-end travel season – from now till 27 December 2019 – you can stand a chance to win 100,000 KrisFlyer miles when you convert your SGD to any foreign currency available on Mighty FX.

For every S$100 that you convert, you stand 1 chance of winning. So, for example, if you are converting S$2,000 to Australian Dollars to spend on your trip to Melbourne, you will receive 20 chances to win. One lucky individual gets to win 100,000 KrisFlyer miles every week until 27 December 2019. Terms and conditions apply. Here’s wishing you safe and savvy travels!

*Deposit Insurance Scheme: SGD deposits are insured up to S$75k by SDIC.

8 Awesome (And Free) Christmas Gifts You Can Give Your Loved Ones
Google Nest Wifi Costs $428: What Is It And Is It Worth Paying For If You Live In Singapore?