Why Does Ikea Sell Meatballs and Chicken Wings (For Cheap)?

Ever wondered why Ikea, a furniture store, sells meatballs? The reasons are pretty ingenious, actually. 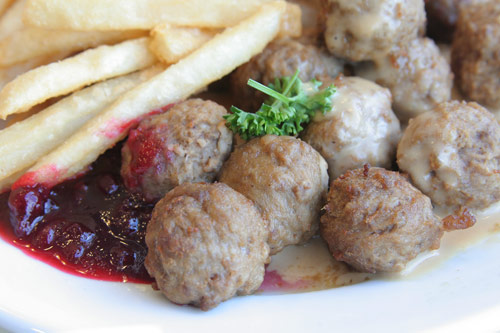 When you hear the word “Ikea”, what’s the first thing that comes to mind? We bet its one of two things: furniture and meatballs. While we’re betting, we’d also wager that you can’t name another food and beverage company that comes close to Ikea, a furniture company, for being known for their meatballs.

So, what is Ikea doing selling meatballs, chicken wings and hot dogs in the first place? Not to mention doing so at a reasonable enough quality and low enough price that would make people come to the store, even if they had no intention of buying any furniture.

You’re probably read that Ikea recently suspended the sales of their chicken wings due to feedback over quality. That might hardly qualify as news worth covering by the mainstream media. That is either great public relations or it was a slow news day. Or both.

You might also question the need for Ikea to withdraw sales of chicken wings just for “review”, since it not a public safety issue. What you’re seeing, though, is brilliant branding in action. Through seeing how Ikea deals with issues that crop up in their food operation, Ikea has the opportunity to reinforce their brand image as a company that is transparent (announcing publicly when there is an issue), attentive to customer feedback, and willing to do what it takes to fix problems.

There are other ways that through selling food, Ikea is strengthening their brand message for their furniture. Ikea furniture is known for being flat-packed and requiring self-assembly by the customer. This commitment to thrift, minimisation of waste and passing of cost-savings to the customer is reinforced by the food section. For instance, patrons are strongly encouraged to return their trays and cutlery to the designation stations.

Ikea’s restaurants reinforce their brand image of being “low price” and “good value”. If you carry this perception over to the furniture section, just like you carry the yummy meatballs in your stomach, then that’s a win for Ikea, even if it means they break even on food sales.

Eating meatballs at Ikea is also an experience that Ikea customers share worldwide. If you meet someone from another country that has Ikea stores, both of you would be able to relate to that shared experience. That is pretty powerful. Thus, the food Ikea sells is an investment into crafting a pleasurable shopping experience.

It might not be every day that you need a new sofa. But three times each day, Ikea has the opportunity of getting you in their doors and into their stores by offering decent, low-cost food.

You might notice that to exit the dining area, you need to walk a circuitous route through aisles upon aisles of furniture and attractive trinkets. Everyone could use another set of plastic storage boxes, right?

After being fed a nice meal at a reasonable price, you might feel obliged to take a longer look at the items on sale. Who would want to look like a kiasu Singaporean who only went to Ikea to eat, right? That’s the law of reciprocity.

In a way, Ikea selling meatballs, hotdogs and (hopefully in the near future again) chicken wings, is them implementing a holistic loss leading strategy. In retail, a loss leader is a product that is sold below what the market would usually be willing to pay for in order to encourage and stimulate the sales of other items that have higher profit margins. In this case, using meatballs and other food (which has low cost prices in the first place) to promote and boost sales of furniture (which have much higher margins).

Interestingly, Ikea does it in two ways: first, by reinforcing a value-for-money image, which carries over to consumer perception of their furniture; second, by getting potential customers in their stores. Looking at their consistent profits, even during economic downturns, it sure looks like Ikea is giving other retailers some food for thought!

Read Also: The Economics Behind The $2.70 Fish Ball Noodles

The 3 Cheapest (Half) Marathons You Can Join In Singapore
How Much Could A Divorce Cost in Singapore?