How Much Do You Need To Pay For Your Child’s University Fees in 20 Years?

This is a question that many parents start asking themselves once the initial euphoria of having a newborn wears off, and the cost of raising a child in Singapore starts sinking in.

We got news for you. You might be a little too late when it comes to planning for your child’s education. In fact, you should have done it way earlier…like before your child was even born!

It seems like we are exaggerating. After all in Singapore, people don’t really pay much school fees at the primary, secondary and junior college level. However, the big-ticket item is the really the university tuition fees.

Despite our government’s emphasis on “experience” over “qualification”, studies have shown that globally, tertiary educated people tend to make higher median salary than their peers who do not have a degree.

The “easiest path” that parents can provide for their child to ease their transition into adult life is to provide them with a higher education certification. That, unfortunately, is the harsh reality of life.

How much has tertiary education cost increased since 2008?

Tuition fees for polytechnic and local universities have increased by a compounded amount of 25% since 2008. This means that for every $1,000 we paid for our tertiary education in 2008, we have to pay $1,250 today. 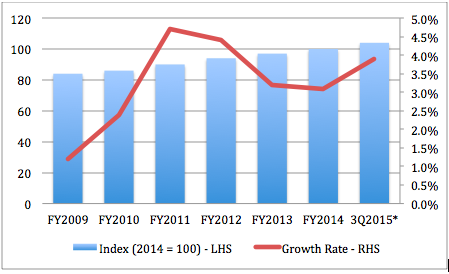 What has caused the tuition fees to rise so significantly over the years?

Before we complain that our “government raised the cost” and blame it on the 70%, the prestige of our universities does come at a price. To entice intellects and experienced professionals, we have to first pay them more than what other universities would do.

Adding on to that, professionals and intellects cannot work without cutting-edge technology, equipment and access to research materials. These things do not come for free.

So how much do we need to set aside for our children’s higher education?

The average increment in local tertiary education over the last 6 years is 3.2% per annum.

With the amount in mind, an estimated cost for a 4-year degree in NUS in 2035 would be about $70,221. In other words, university cost will rise by almost twice in 20 years time.

Exhibit 2: University Tuition Fees Is Expected To Increase By 2x In 20 Years

Looking at Exhibit 2, it may actually be wise to save up for your child’s education even before you have any intention of having a child. It might seem a little kiasu to say that, but isn’t that what Singaporeans are good at anyway?

We like to remind you that the number in the exhibit above is just for one child. So if you have more than one child, multiple it accordingly.

And let’s not talk about Law and Medicine schools.