Have A Child Diagnosed With Autism? Here’s What The Early Intervention Programme For Infants & Children (EIPIC) Is And How It Can Help

Here’s an overview of EIPIC and the various fees and financial schemes available to help parents with autistic children. 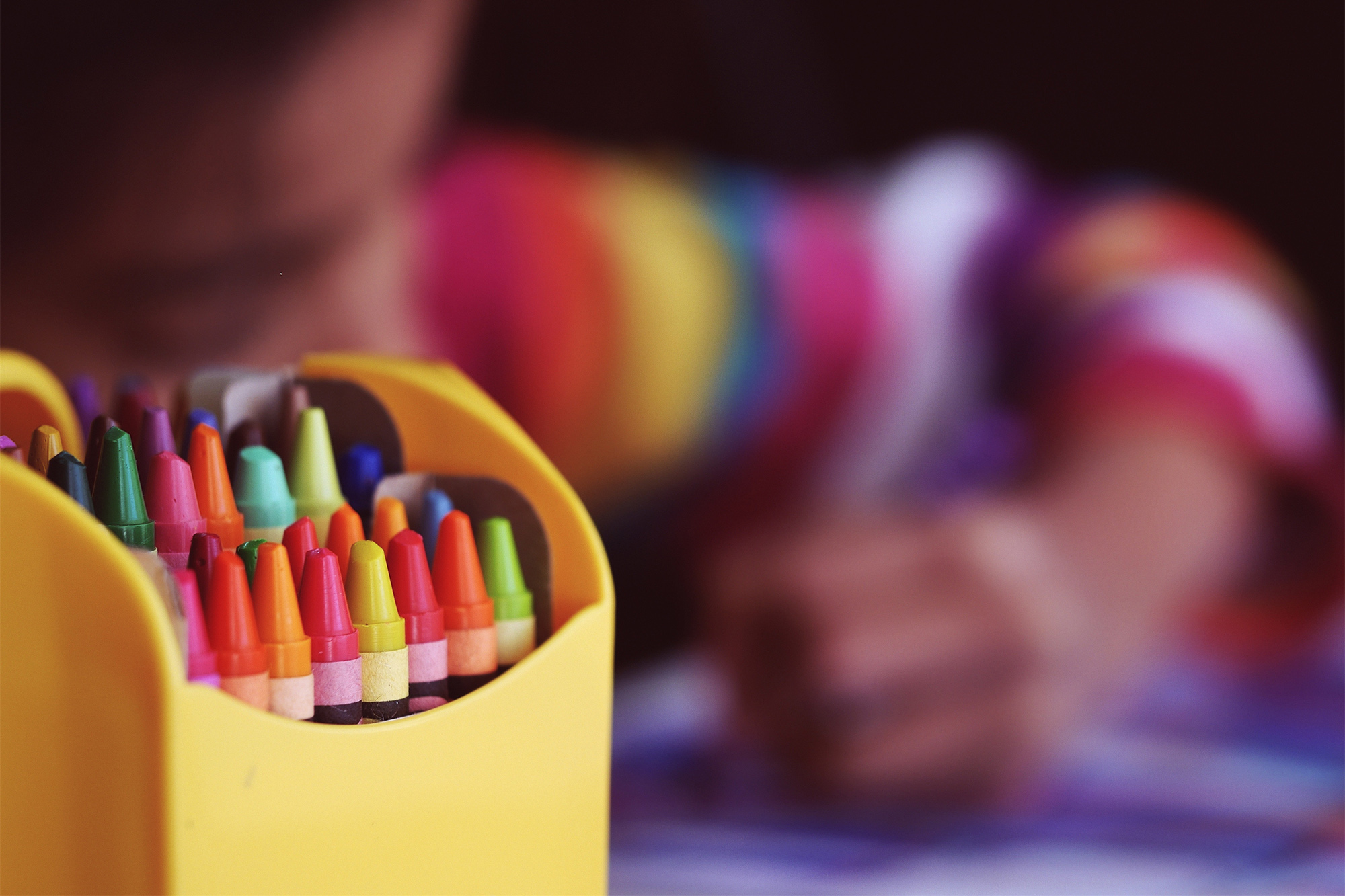 This article was contributed to us by Julia Chan. Information and views shared in this article are based on her own personal experience.

When my child was diagnosed with Autism Spectrum Disorder, we made the decision to enrol him in an Early Intervention Programme For Infants & Children (EIPIC) so he could undergo a tailored programme and have the space and support to develop his skills and cope with his developmental challenges.

Here’s an overview of EIPIC and the various fees and financial schemes available to help parents.

Read Also: Autism In Singapore: How Much Can Parents Expect To Spend On Their Autistic Child During Preschooling Years

What Is Early Intervention Programme For Infants & Children (EIPIC)?

There are 10 government-funded EIPIC centres that offer the programme, consisting of activities, therapy and educational support services meant to maximise the child’s developmental growth potential and reduce the development of secondary disabilities.

Referrals to enrol in an EIPIC programme is done by SG Enable. Applicants need to be Singapore Citizens or Permanent Residents 6 years old or below and recommended for EIPIC by a doctor from the Child Development Unit (CDU) at KK Women’s and Children’s Hospital, National University Hospital, Singapore General Hospital, or a private paediatrician. From 1 April 2019, EIPIC fee caps will be lowered. This will remove a huge financial burden from families, since in the past, our EIPIC fees came up to over $19,000 even after government subsidies.

In January this year, the Ministry of Social and Family Development (MSF) announced enhancements to improve early intervention support for children with developmental needs. As part of these improvements, two new programmes will be rolled out in phases from July 2019 onwards.

EIPIC Under-2s Programme: Caregivers and parents will be taught intervention strategies (e.g. how to feed and dress their child, communication using flashcards or visual cues etc) to help them reach developmental milestones.

Developmental Support Plus (DS Plus): Children who have made sufficient progress under the EIPIC will be able to receive intervention while attending mainstream preschools and be equipped with skills in a larger class setting.

In the recent Budget 2019, the government also announced that it will provide greater support and recognition to working mothers with handicapped and unmarried dependent children by allowing them to claim Grandparent Caregiver Relief regardless of the child’s age (instead of a maximum of 12 years old now), if they have met all other conditions. This will take effect from YA 2020, and applies to income earned in 2019.

To learn skills related to autism, caregivers can attend courses at ARC and tap on the Caregivers Training Grant to offset course fees of up to $200 per financial year.

Since different EIPIC centres run their own intervention classes, I’ll be sharing my experience with the WeCAN Early Intervention Programme run by the Autism Resource Centre (ARC). WeCAN’s website gives an overview of the intervention journey that students and their parents go through to prepare them for a mainstream primary school, special education school or a privately-run programme.

Read Also: Guide To Financial Planning For Parents Of Children With Added Needs In Singapore

After being placed on a waitlist with an expected 6 to 18 month wait, we were fortunate that ARC had an opening for my son in the last term of his Nursery year.

Structure: He was placed in a small private class of just two students with a permanent teacher, supported by a supervisor who would make her rounds through various classes. 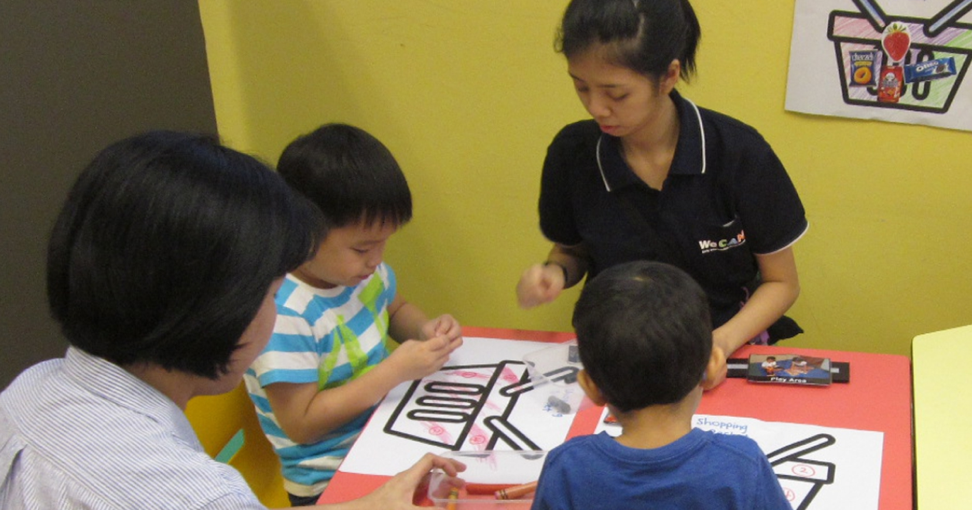 Classes were four times a week on weekdays, for an hour and a half each. Sometimes parents get to participate in class or observe from another room. In this small classroom setting, his teacher would assess his learning profile and set learning goals.

The teacher would also create visual work systems that help him understand instructions, develop positive work habits (such as knowing where to keep his bags, shoes, etc), communicate his thoughts, and manage his emotions, via activities such as: Photo: Using this visual chart, my son can see what the expected behaviours for circle time are. If he did well during circle time, he can also point to the options on this chart to tell his teacher what he wants as a reward.

After each class, his teacher would give us an update of what went well, what didn’t, and strategies or tools she used to help him. We could also ask for resources to try at home and reinforce the strategies used.

Learnings: EIPIC is a journey not only for the child, but parents too.

From observing how well my son follows visual instructions, and his struggles to cope with transiting from one room/activity to another, we began to understand why he could not follow verbal instructions to independently complete a series of steps. In the past, this would frustrate us especially when we were rushing to work and cause many unhappy mornings for everyone.

After he started EIPIC, we learnt how to adapt the visual systems in class to create similar systems at home, particularly for preparing for bedtime at night, and preparing for school in the morning. 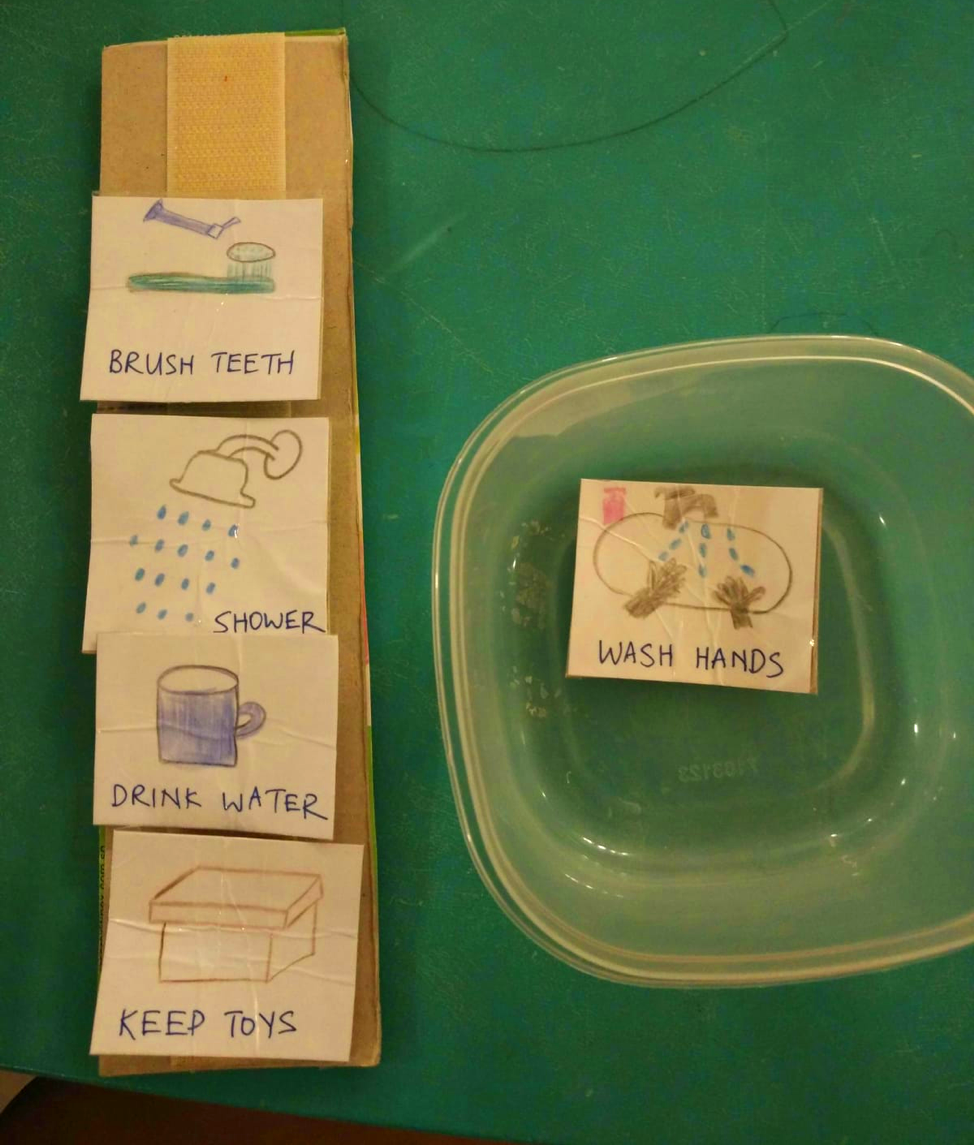 Photo: Our homemade visual work system on how to prepare for bedtime. Task cards are arranged in order on the Velcro strip. Once he has completed a task, the task card goes into the container.

It took a few months for him to complete through the routine using the visual system with some assistance, but today he can complete the routine without any visuals and with minor assistance.

Structure: In his K1 year, my son graduated to a class of four students taught by two teachers. The sessions were still one and a half hour long on four days a week. On certain days and weeks, parents could either participate in classes or observe discreetly from another room.

The setting changed from a private class to a shared classroom setting, where students would rotate from one room to another, from one station to another. 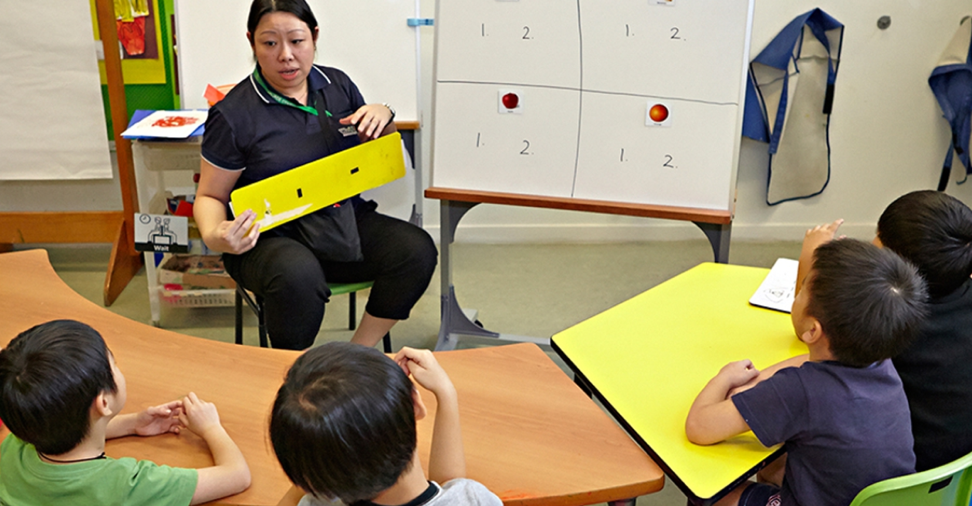 Students would learn social skills in group settings (such as raising hands to get teacher’s attention, answering when one’s name is called, sharing items with friends, helping to take and put away stationery in the proper locations etc).

Every half a year, the teacher would draw up an individual education plan to understand where my son is currently at in his learning journey, identify key learning objectives, and set goals and areas of cooperation between family and centre to help my son.

We would have a parent-teacher meeting in January and July to discuss the items in the plan, feedback from mainstream preschool teachers, doctor and psychologist, and any future goals we wanted to work towards.

ARC would also organise an outing towards the end of every term and develop learning objectives to help the students prepare for the outing. This includes identifying different jobs or sea animals, to knowing the physical environment of the outing location – how we are getting there, what the entrance looks like, what can we do inside, what are good/bad behaviours, etc. 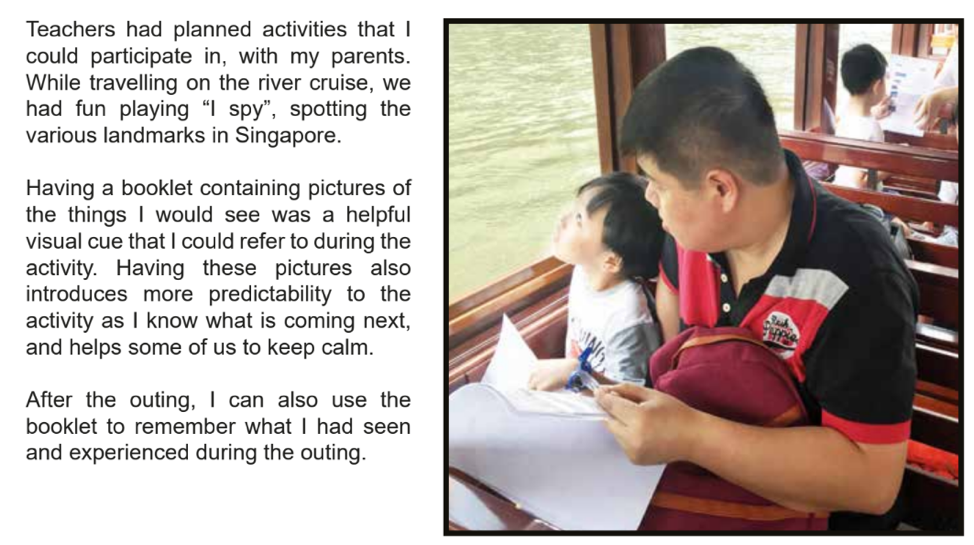 Learnings: Like the previous year, after each class, his teacher would update us on his progress. One useful thing we learnt was the concept of Zones of Regulation she created visuals from to help him cope with managing his emotions. 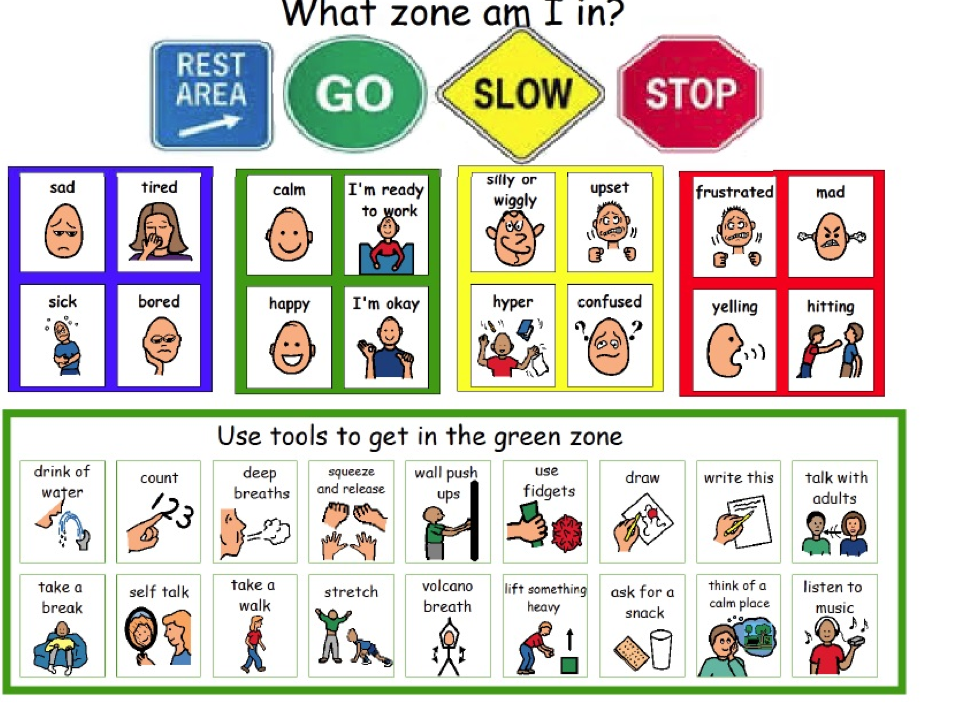 We would reference the same concept to help him de-escalate his energy or stress levels to avoid meltdowns. If he had to undergo any changes to his usual schedule or encounter new environments, we would plan his route (to avoid encountering too many triggers at one go) and create a schedule he could read in advance to mentally prepare for the changes. 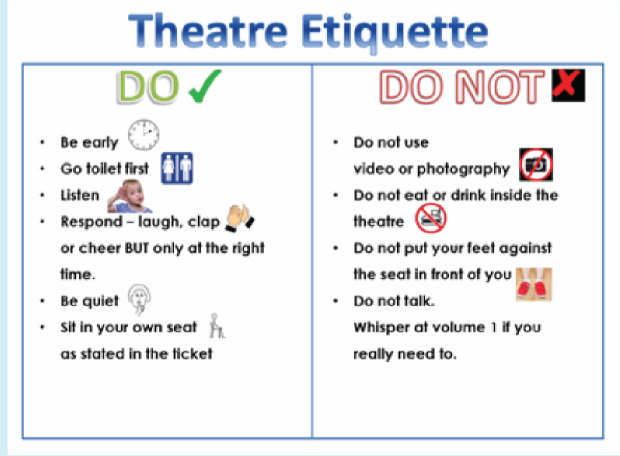 Structure: In K2, my son’s class size increased to 6 to 8 students, held over 2 days a week in three-hour sessions each. The increased class size was meant to help students get used to larger group lessons, and the longer sessions would let them practise lengthening their attention span.

This is an important year as students have to learn skills they need to know for post-EIPIC settings, such as attending a mainstream or special education school. 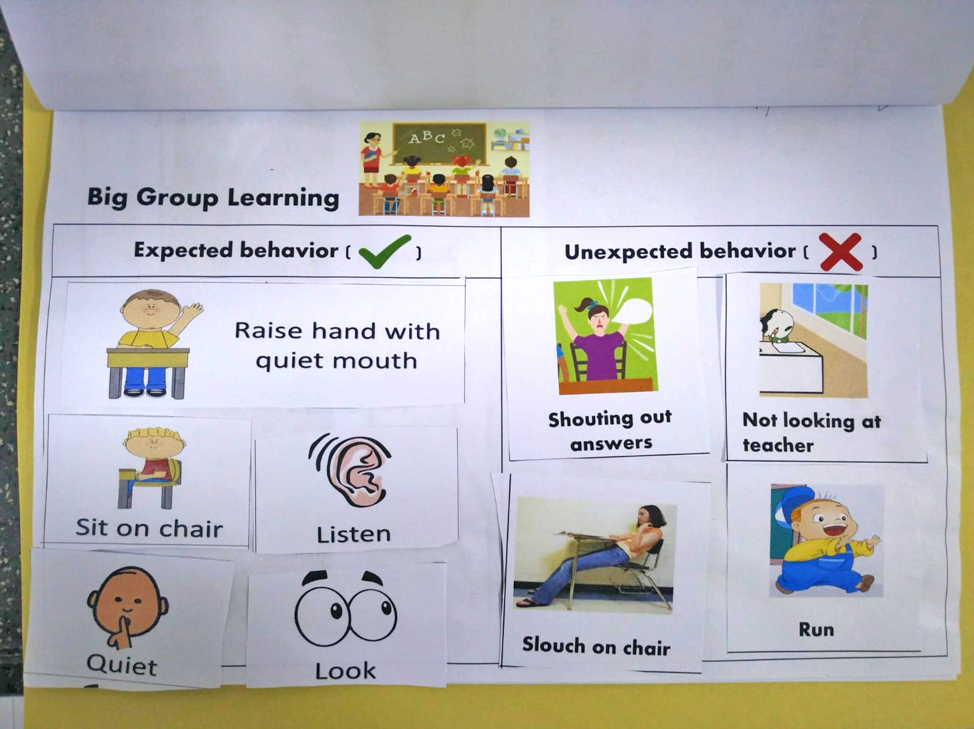 The first half of the lesson would help students familiarise themselves with a larger group setting, such as knowing and practising expected behaviours. Students were taught social games such as “What’s the time Mr Wolf?” and “Dog & Bone” so that they would be familiar with these games if asked to play in primary school.

After recess, they would adjourn to a classroom with tables and chairs to experience learning in a classroom setting, which would help them adjust to primary school better. 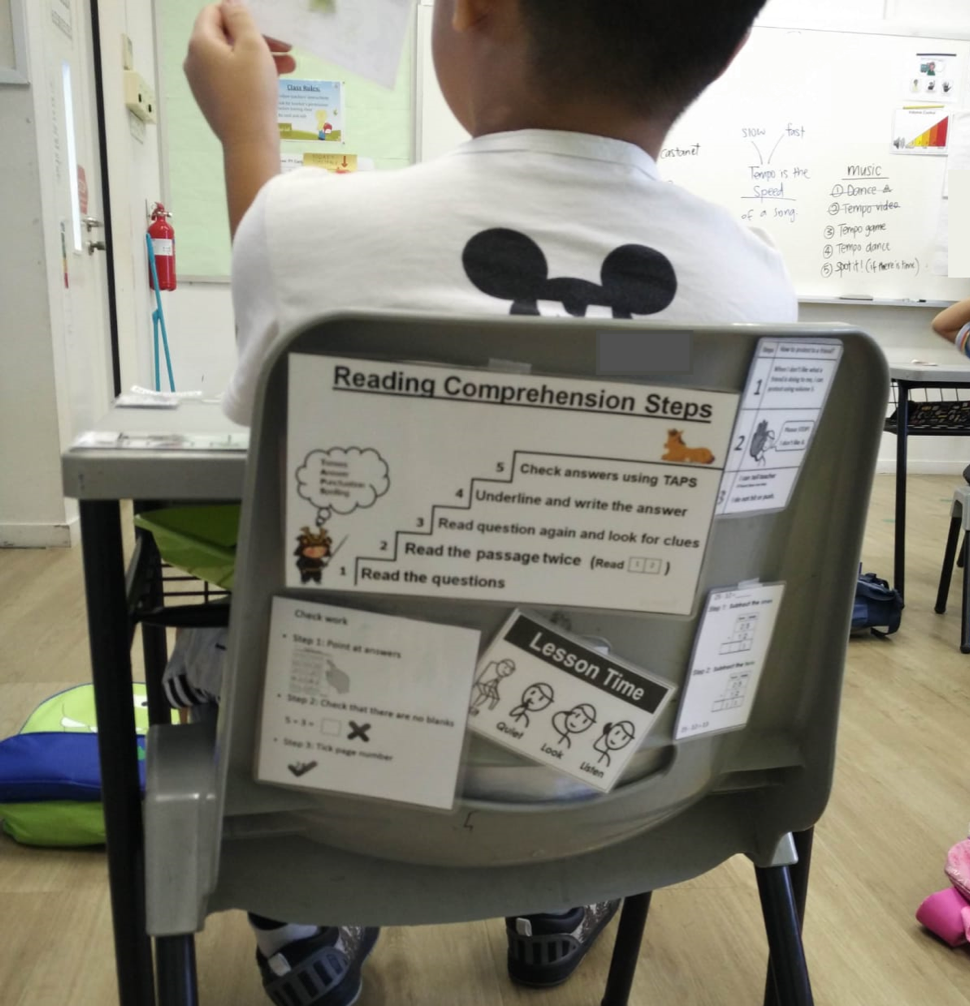 Photo: K2 students in WeCAN learning how to adjust to a classroom setting to prepare for Primary 1

Students would learn expected behaviours of interacting with the teacher and fellow classmates, learning using the video projector, referring to important notes that the teacher has written on the whiteboard, and taking ownership of their belongings (keeping their stationery neatly in their bags etc).

Learnings: As parents, we may take for granted that our child can automatically adjust to new environments.

However, through the transitions that WeCAN helped my son through, I learnt that familiarising him with his new primary school would be an important step in settling him in.

The benefits of learning in a classroom setting in WeCAN became evident as he happily settled into his primary school class during orientation and he knew what was expected of him.

Another useful tip I learnt from WeCAN is writing down a short narrative of the experience my son would go through when he changes environment, and using words to shape his attitude towards it, such as “I will have new teachers and new friends.” to signify excitement at a new phase in life.

To ease him into primary school, his WeCAN teacher also prepared an “All About Me” summary describing his condition, what works/doesn’t work, how he communicates and various supports that his primary teacher and Allied Educator can use.

Going through early intervention with WeCAN over the years (to giving more attention to detail) also led us to realise earlier that we needed to start early in preparing my son for primary school.

Before Primary 1 started, we had taken him to visit the school and student care to familiarise him with the physical layout, letting him wear the school uniform a few days earlier, and letting him carry his new bag and use his new stationery a week before starting primary school.

Early intervention is a journey for both the child and his family, to understand each other better and work towards finding strategies that help the child cope with changes in life.

Read Also: Financial Planning For The Future Of Your Special Needs Loved Ones

Baby Delivery Guide Singapore: What To Decide And Apply For When You Are In The Hospital
The (Unexpected) Financial Challenges Of Having A Child In Singapore. A Singaporean Couple Shares Their Experience With Us