We look at Yangzijiang, StarHub, Noble and SUTL enterprise. 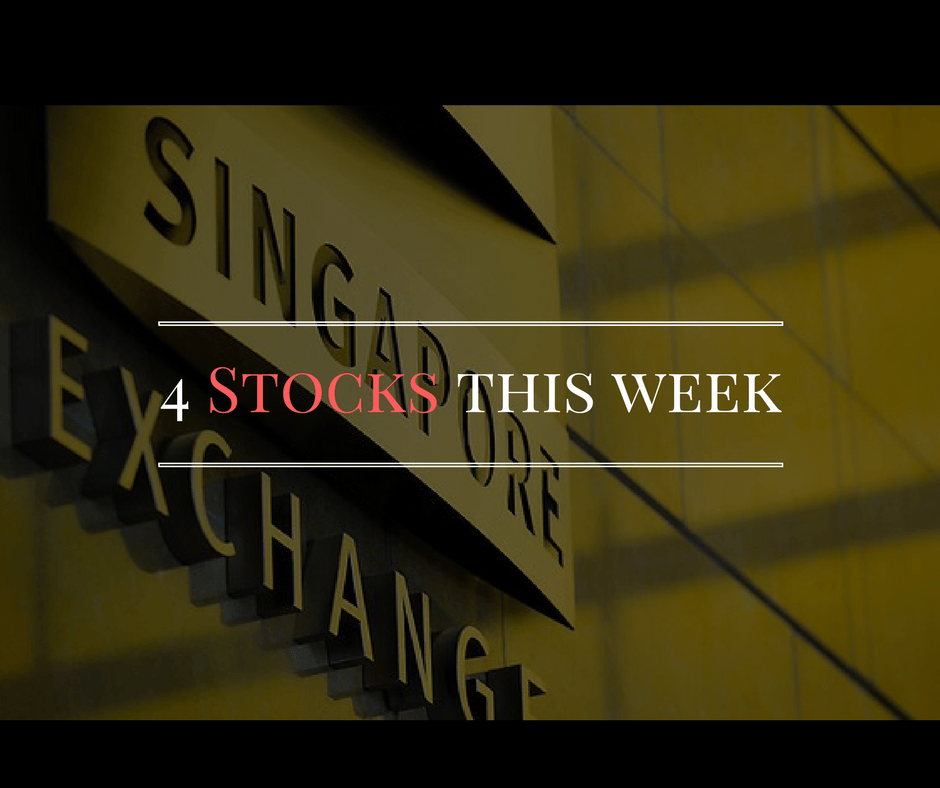 Our 4 Stocks This Week Column highlights several companies that made an impression in the past few weeks, be it in the results they posted, share price movements, industries they operate in or any other reason that makes them an interesting stock to look at.

Globally, the Morgan Stanley Capital International (MSCI) All-Country World Index (ACWI), which acts as a proxy of the how stocks are performing in the world, continued to hit new highs. In the USA, the Standard & Poors 500 (S&P 500), an index comprising 500 large companies listed on the New York Stock Exchange (NYSE) and NASDAQ, hovered at record levels. It rose for the week, although declining marginally after reaching a high on Wednesday.

These are the four stocks that came on our radar this week. If you have any stocks that you think are interesting and want to feature them here, do drop us an email or comment on this post on our Facebook page.

Yangzijiang is part of the Singapore Exchange’s (SGX) Maritime and Offshore (MOE) index. The MOE index has been one of the top performers in Singapore since the start of the year, having rebounded close to 20% since September 2016. This has largely tracked the price rebound in crude oil.

With crude oil prices rising from its troughs of US$26 per barrel in January 2016 to US$54 per barrel currently, many analysts are of the opinion that the troughs in the MOE sectors are near.

Yangzijiang released its full year results for 2016 on Wednesday (1 March 2017). Its revenue declined 6% to RMB15.1 billion from RMB16.0 billion last year. Similarly, its net profit posted a decline of 29% to RMB1.8 billion from RMB2.5 billion in 2015. However, its fourth quarter results pointed to a stronger performance and possible upturn, with revenue soaring 76% to RMB5.5 billion and net profit increasing by 13.6 times to RMB0.6 billion.

This was better than expected, as both OCBC Investment Research and DBS Vickers raised its respective share price targets to $0.96 and $1.12 respectively. Investors also agreed with this view, with the company’s share price running up after the market opened on Wednesday (1 March 2017) and continuing to rise till the end of the week.

Also Read: 5 Sectors Within SGX That Beat The STI In 2016 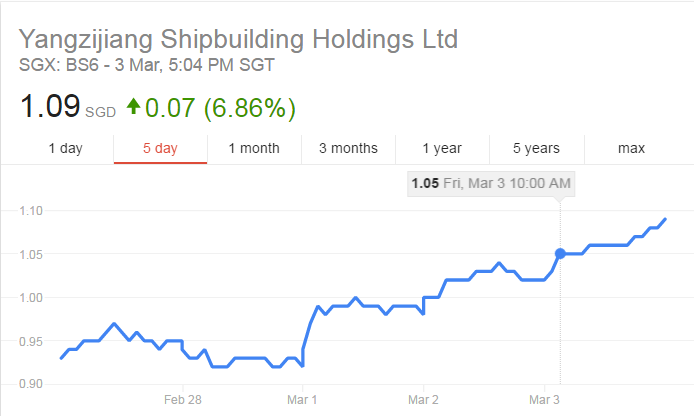 Together with M1 and Singtel, StarHub has come under intense pressure of late. This is mainly due to the impending arrival of a fourth player, TPG Telecom, into the telecommunications market in Singapore.

This has benefitted the local consumers with the incumbent telcos having had to introduce more competitive pricing schemes to remain relevant once the new entrant begins operations by early 2018.

However, local telcos have had the reverse effect. StarHub had actually released its results at the beginning of February, reporting a generally stable revenue for 2016 of $2.4 billion. This was approximately 1.9% lower than its 2015 revenue. Its net profit declined by a steeper 8.3% to $341.4 million in 2016 compared to $372.3 million in 2015.

Together with its results announcements on Friday (3 February 2017), StarHub also reported that it would be reducing its quarterly dividend by 20%, from 5 cents to 4 cents per quarter. This translated to its shares tumbling a full 20 cents, or 6.7%, when it opened on the next trading day, Monday (6 February 2017). StarHub continued to trade weaker in February. 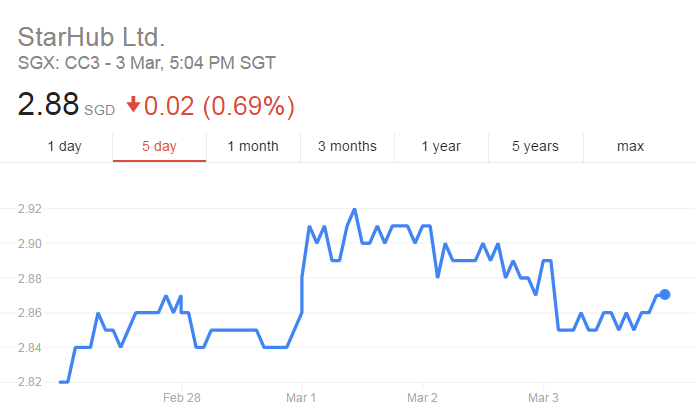 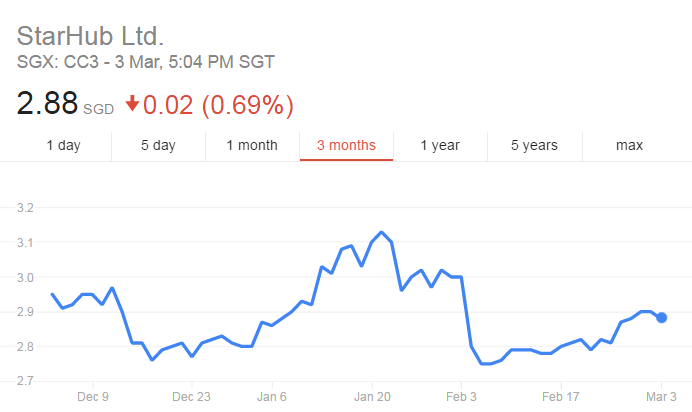 Noble’s share price has risen close to 32.4% since the beginning of the year. This was on the back of a possible interest from one of China’s largest companies Sinochem. However, the rally was halted by another negative report from Iceberg Research, which has been issuing numerous papers regarding the fragility of Noble’s business. 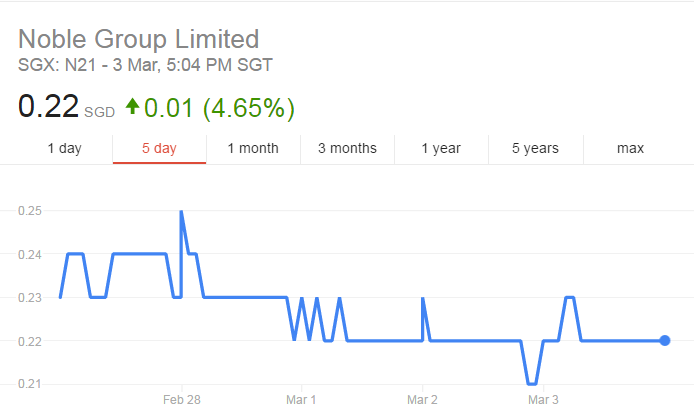 SUTL Enterprise is a leading developer, consultant and operator of integrated marinas. It owns the ONE°15 brand, which also include the ONE°15 Marina Club at Sentosa. With growing affluence bolstering the growth of its business, SUTL has been expanding its operations in Asia, US and Europe.

The company released its 2016 results on Monday (27 February 2017). It reported a 2% increase in revenue to $28.2 million this year, compared to $27.7 million last year. Significantly, it posted a 138% increase in net profit attributable to shareholders to $3.9 million.

It also announced that it would be distributing a dividend of 2 cents per shares, representing about 44.9% of its profit.

Also Read: 4 Interesting Stocks On SGX That May Continue Doing Well In 2017 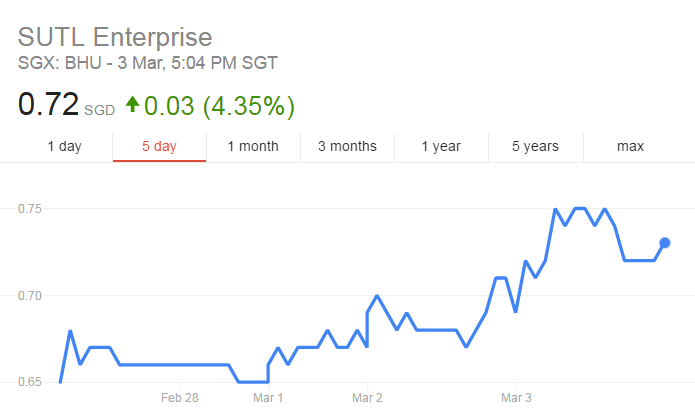 Why Today’s Generation May Only Retire At A Later Age
Piyush Gupta (DBS), Loh Boon Chye (SGX) & Lim Kok Ann (DBS Vickers) Share With Us The Biggest Investment Mistakes They Made During Their Younger Days