Your Step-By-Step Guide To Making Your CPF Nomination Online

There is no better time than now to make a nomination.

As we mentioned previously, making a CPF nomination is important as it provides the CPF member with an option to specify who will receive their CPF savings (the nominee), and how much each nominee will receive, upon their demise.

In addition, CPF members are encouraged to review their nomination regularly and to revise in a change of circumstances, such as in marriage, the birth of a child, divorce or demise of nominees, to ensure that it fits their intention.

Previously, CPF nominations were to be either done personally at CPF Service Centres, or via a prescribed CPF Nomination Form that is to be filled up, signed by the member and two witnesses, and returned to the Board for processing.

Recently, the Board has introduced the online nomination, where members can make cash nominations online without the need to use paper forms or visit the service centres.

But how should you use the nomination system? We spell out the steps for you so that your online nomination will be hassle-free.

The pre-requisite of making a nomination online is to apply for a SingPass account, which allows every individual to transact with government agencies.

If you do not have a SingPass account, or if you have forgotten your password, you may apply for a new account or reset your password online, or visit any of the SingPass counters in-person with your documents such as original NRIC or FIN card for verification.

If you already have a SingPass account, you can skip to the next step.

#2 Get Ready Your Nominees’ and Witnesses’ Particulars

The next step to the online nomination process is to gather the particulars of your nominees and two witnesses.

For your nominees, you will need their names, IC numbers, and email address. For nominees who are non-citizens or PRs, you are required to obtain their names, foreign passport or identification number, as well as their mailing address.

At this juncture, you should also consider if you would want to authorise specific persons, including your nominees, to obtain your CPF account information upon your demise. The Board, upon request from the authorized persons, will disclose your CPF statements of account in and after the year of your demise, as well as nomination details to your authorised persons.

Read Also: 4 Common Questions About CPF, And Our Answers To Them

Once you have the necessary information, you may now log in to CPF Online Services to make your nomination.

Upon logging in, you should first verify your particulars. 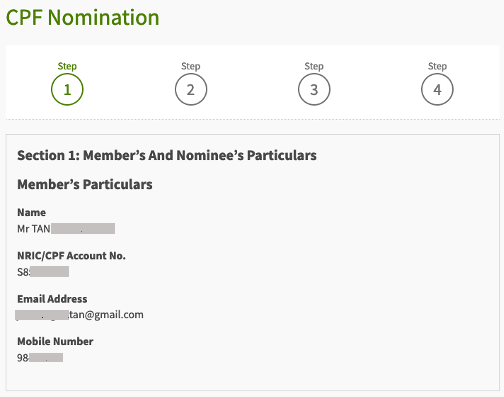 Next, you will be required to add your nominee’s particulars. For nominees who are foreigners, you will be prompted to enter their mailing address as well. 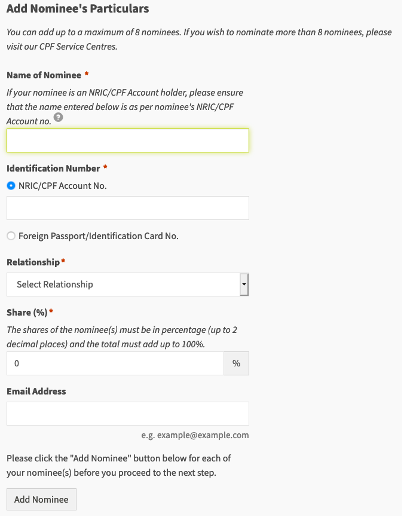 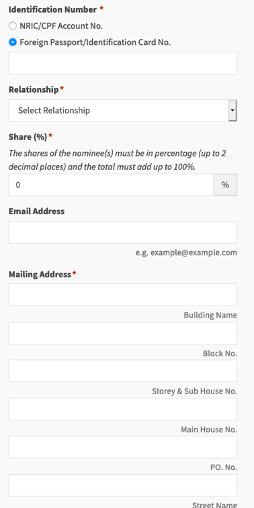 In the next step, you will be asked if you would want to authorise the Board to disclose any information relating to your CPF accounts and nomination to specific persons, including your nominees. If you would like to authorise a non-nominee, you will be required to enter their particulars, such as their name, IC number and contact details. 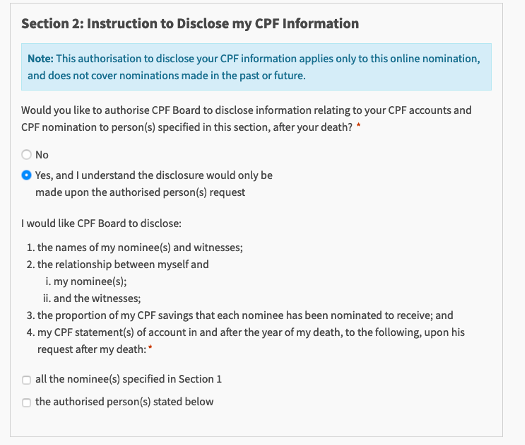 In the next process, you will be prompted to enter the details of the two witnesses, including their contact details in order to notify them to witness your online nomination. 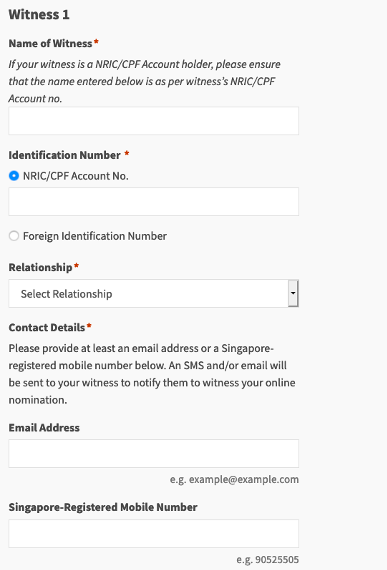 Once your witnesses have confirmed your nomination, it will be processed by the Board within four working days upon receipt by the Board.

Read Also: What Happens To Unclaimed CPF Savings After Singaporeans Pass On?

There are things to note when making a nomination online. For instance, the system currently allows a maximum of eight nominees in each transaction, and only cash nomination is accepted for now.

If you wish to make a nomination with more than eight nominees, you are encouraged to visit any of the CPF Service Centres to apply for your nomination.

In addition, if you would like to make an Enhanced Nomination Scheme nomination (where the monies will be credited to nominee’s CPF accounts), or Special Needs Saving Scheme nomination (for parents to nominate their children with special needs), you would also require to visit the Service Centres to complete your application.

The Customer Service Executives can act as witnesses and clarify any questions you have with regards to your nomination.

The introduction of the online nomination system is certainly a welcome move for everyone, especially for those who are busy on the day. In addition, the system allows for the confidentiality of your nomination as your witnesses will have no access to your nomination details.

What Happens To Your CPF Grant Monies When You Sell Your House?
Rising Retirement Sum: Why It’s Important, And What You Can Do About It (At Each Stage Of Life)