Sembcorp Industries And Marine Demerger: Here’s What Investors Need To Know And Do About This Corporate Action

A deep-dive into the upcoming Sembcorp Marine and Sembcorp Industries demerger – and what it means for current and future shareholders. 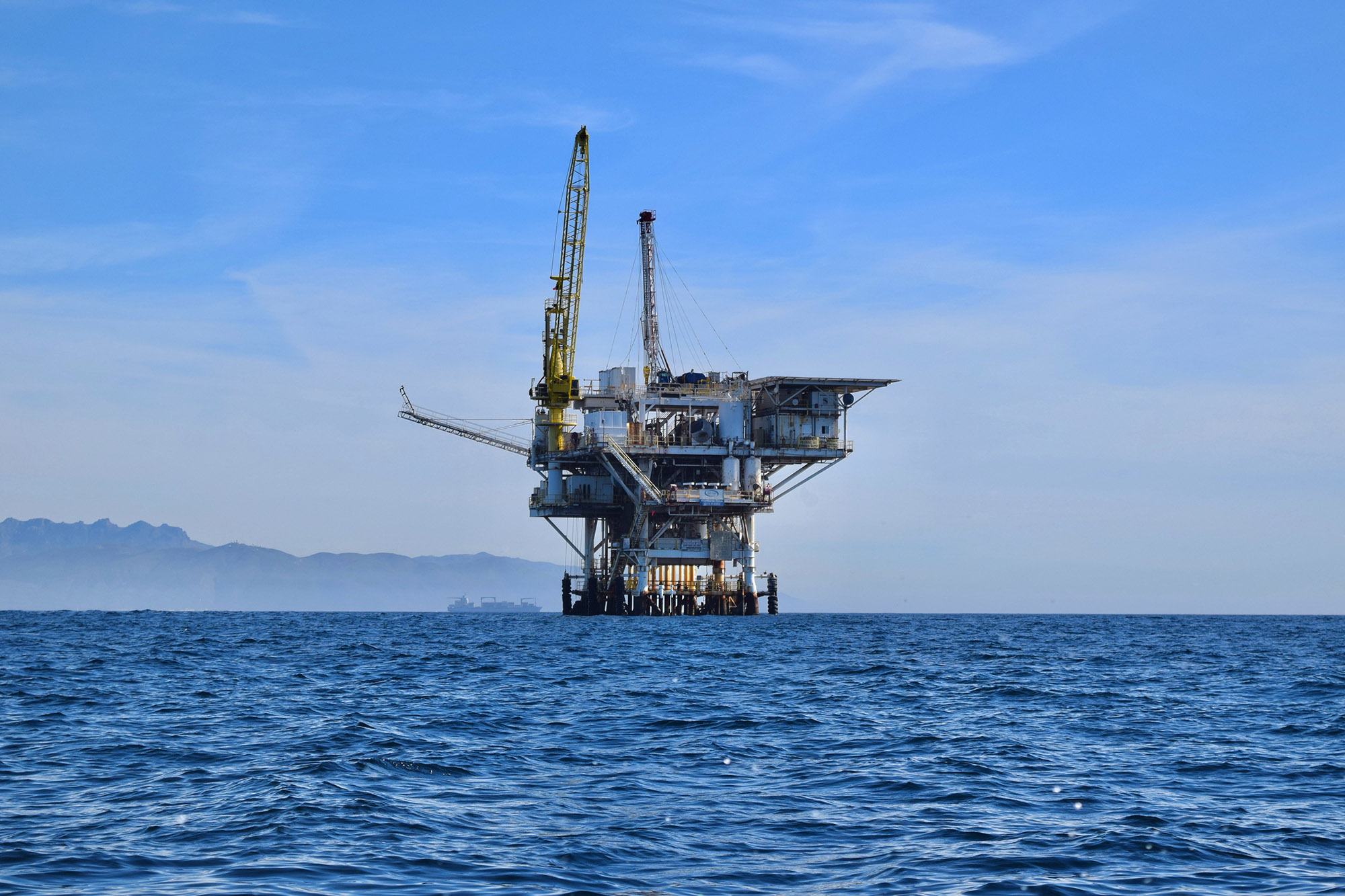 This article was written by Royston Tan and first published on New Academy of Finance. Views are the author’s own and republished with permission.

Read Also: Is Time Running Out For Keppel And Sembcorp Marine As Oil Prices Collapse Below Zero?

With the current demerger announcement, that reality is finally happening and I believe, just on face value, it will be positive for Sembcorp Industries shareholders.

Let’s go through the step by step procedure of this demerger exercise.

The separated Sembcorp Marine will need additional funding to stand on its own, given the current cash burn rate as well as the bleak prospect in the offshore and marine sector.

There will be a recapitalization exercise which involves raising S$2.1bn through the SCM Rights Issue.

This S$2.1bn will be mostly undertaken by Sembcorp Industries (SCI), amounting to S$1.5bn since it is currently the largest shareholder of SCM at 61%. However, Sembcorp Industries does not have to fork out real cash as this S$1.5bn rights will go towards offsetting the S$1.5bn loan it provided to Sembcorp Marine back in 2019 under the Subordinated Credit Facility.

The Dilemma For Sembcorp Marine Shareholders

This proves to be a dilemma for existing Sembcorp Marine shareholders which could see their stakes being diluted from the existing 39% to 6.5% if none decides to take up the rights offer.

The company will raise an additional of S$2.1bn in cash (actual additional cash raised is only S$0.6bn as S$1.5bn will be used to repay the existing subordinated loan). So total post recapitalisation market cap is S$1.55bn + S$2.1bn = S$3.65bn

So assuming that this deal goes through, Sembcorp Marine will see its outstanding shares increase from 2.09bn to 12.54bn, and its share price collapse to approx. S$0.30, potentially as soon as when the shares are un-halt. This is unless the market does not believe that the deal will go through.

If no existing sembcorp marine public shareholders take up their rights, then Temasek will subscribe for it which will give Temasek direct equity ownership of up to 23.6% in Sembcorp Marine.

Notice that Temasek’s stake will increase to between 29.9% to 58%. This is because Temasek is the largest shareholder of Sembcorp Industries, so at the minimum, it will have a close to 30% stake in Sembcorp Marine post demerger or up to 58% if no existing public Sembcorp Marine shareholders subscribe for the rights.

With a > 50% majority stake in Sembcorp Marine, I reckon the next step could the merger of Sembcorp Marine with Keppel’s O&M division upon Temasek gaining majority control of Keppel which is slated to be completed before October 2020. 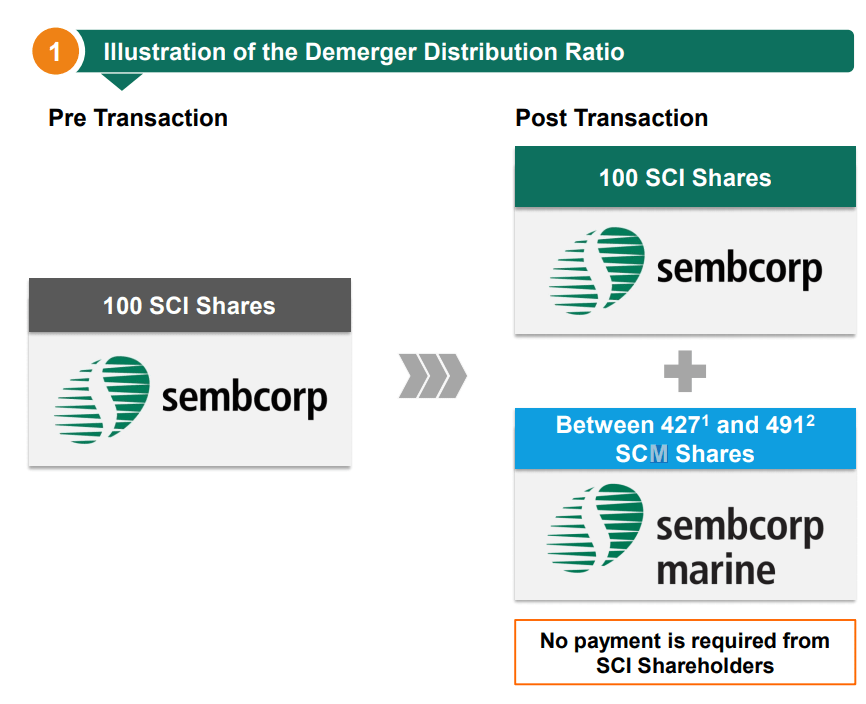 3 conditions need to be fulfilled.

Sembcorp marine’s existing shareholder might not want to approve the huge dilution that comes with the rights issue. Keeping the status quo might ultimately force Temasek to make a direct and higher offer for the existing stakes vs. the current proposal.

Note that by forking out “just” S$0.6bn, Temasek will have 58% of Sembcorp Marine. This will imply that the full 100% stake of Sembcorp Marine will be worth just S$1bn vs. the last close market cap of c.S$1.8bn.

Is this a great deal for Temasek? Well, if you believe that Sembcorp Marine might go into receivership one day, then forking out any amount >$0 might not be a good deal. However, given the “need” for Temasek to save one of our most iconic shipyards in Singapore, then I would think its probably a good deal on the part of Temasek to gain 58% ownership status with just a direct cost of S$0.6bn. 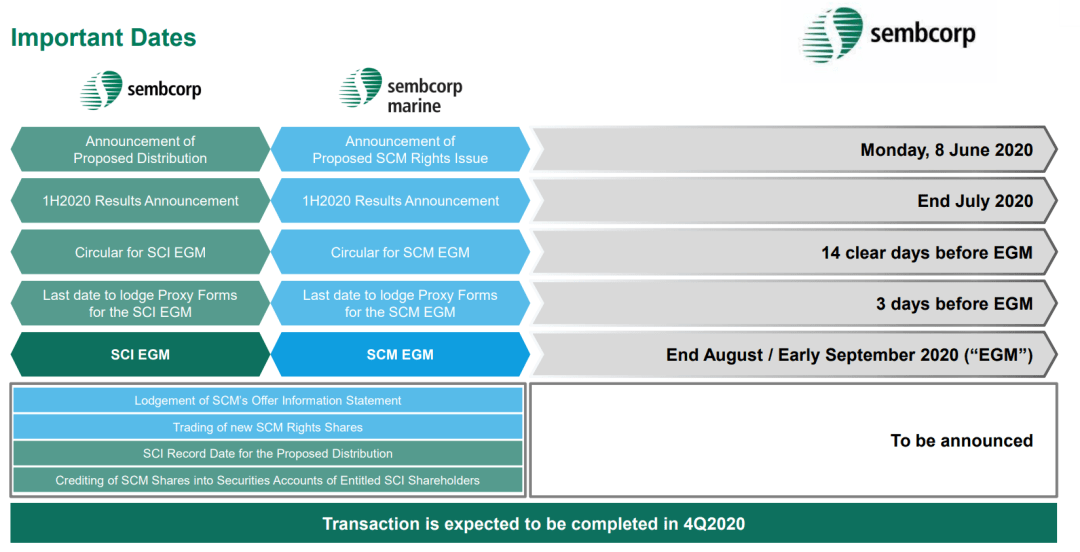 What Next For Sembcorp Industries’ Shareholders

I believe that this is a demerger that should have happened 3-4 years ago when Sembcorp Industries underwent a management change and a 1+ year restructuring effort. There was a huge disappointment when Sembcorp Industries subsequently announced that the key restructuring was the potential monetization of its India utility business through an IPO. That till today has not materialised.

This demerger will allow Sembcorp Industries to be the largest pure utilities/energy blue-chip player in SGX which I believe will find favor among investors and institutional portfolio managers who have strict mandates to only invest in pure utility company for their earnings and dividends stability.

Hence, I sense that the market will take this news favorably for Sembcorp Industries. This is unless the market views its S$1.5bn loan to Sembcorp Marine being converted into equity as negative. Strictly speaking, this S$1.5bn goes towards an ultimate 30.9-35.4% stake (see the figure in Step 2) in Sembcorp Marine which does not seem like a good deal at all.

However, I guess Sembcorp Industries will have to bite the bullet as keeping the status quo will not be in the best interest of its shareholders as well. We won’t know if the company might ultimately have to write-off a huge chunk of its shareholder’s loan given to Sembcorp marine.

What Next For Sembcorp Marine’s Shareholders

For Sembcorp marine’s shareholders, the choice is harder. To take up the rights could potentially mean “throwing” money without any light at the end of the tunnel in terms of an operational turnaround for the company.

With no new orders and a huge load of fixed expenses, having to run both its mega yards in Singapore and Brazil, the company’s cash burn will be relatively high in my view.

Not taking up the rights will mean huge dilution and a “cheap” sell to Temasek who could ultimately end up with 58% of the company by just paying S$0.6bn.

Sembcorp Marine’s share price could also be under heavy selling pressure from newly minted Sembcorp Industries public shareholders who now control more than 30% of the company. This is particularly going to be the case if Sembcorp Industries sees a valuation re-rating with its share price performing well post this exercise. Their existing Sembcorp marine shares will hence be seen as “free”.

Subsequently, I guess that Temasek will make an offer to buy up the rest of Sembcorp Marine at the cheap to combine its operations with Keppel’s O&M division (upon taking majority ownership of Keppel) to form one single entity that is cost-competitive enough to compete against our Korean and Chinese counterparts.

So, the biggest winner seems to be Temasek from this deal?

What Next For Keppel’s Shareholders?

For existing Keppel’s shareholders, this news should be seen as positive on the surface and one step closer towards the ultimate divestment of its stake in Keppel O&M to Temasek.

Read Also: How Investors Should See And Do About The Partial Offer For Keppel?

The question lies ultimately in the “sale price” of its O&M entity which is likely to be undervalued in its books.

To me, this doesn’t look like positive news for Sembcorp Marine which the market seems to imply before the halt of its and Sembcorp Industries’ share price (Sembcorp marine’s price jump from S$0.76 to S$0.85).

Existing Sembcorp Marine’s public shareholders will need to take a gamble by subscribing to its rights and banking that Temasek will ultimately provide a better deal to take over the rest of the company in full (before its cash runs out again) or choose to walk away and be significantly diluted by not partaking in the exercise of this right.

For existing Sembcorp Industries’ public shareholders, though the Implied terms might not be the best, this is probably a scenario that needs to happen for the company to grow in its core utilities/energy operations without concerns of having to backstop its marine business.

The company’s valuation multiple could see a subsequent valuation re-rating if management can demonstrate greater resilience and growth in its core utilities/energy business post its marine demerger.

This is likely a prelude to the ultimate merger with Keppel O&M, which can only materialise if facilitated by Temasek.

If you liked this article, you can follow New Academy of Finance on Facebook or join their Telegram Channel for more investment and personal finance articles.