In our 4 Stocks This Week, we look at M1, Noble, Hock Lian Seng and Singapore Airlines (SIA). Out of the four companies, only Hock Lian Seng might be less known as the other three are all listed on the Straits Times Index (STI). We tell you more about why these stocks are featured below.

Before diving in, we always welcome readers to reach out to us, via our Facebook page or  email, to let us know if you think there are other interesting stocks. This will also help other readers to get more relevant information.

To start off, we look at how the macroeconomic climate is functioning. A good proxy, and one that we commonly use, is the Morgan Stanley Capital International (MSCI) All-Country World Index (AWCI). This week, the MSCI AWCI continued to climb to record levels on the back of continued optimism for global growth.

In Singapore, our benchmark STI rode on the positive wave globally to continue recording new 52-week highs. Rounding the week 1.1% higher, the STI ended on 3.16968 on Friday (17 March 2017), levels not seen in the last 19 months.

After the market closed, Singapore Press Holdings (SP) announced that M1’s largest shareholders were undertaking a strategic review of their holdings in the company, with a view to a potential transaction. The main shareholders of M1 are Singapore listed SPH and Keppel Telecommunications and Transportation (Keppel T&T) as well as Malaysia’s Axiata Group. 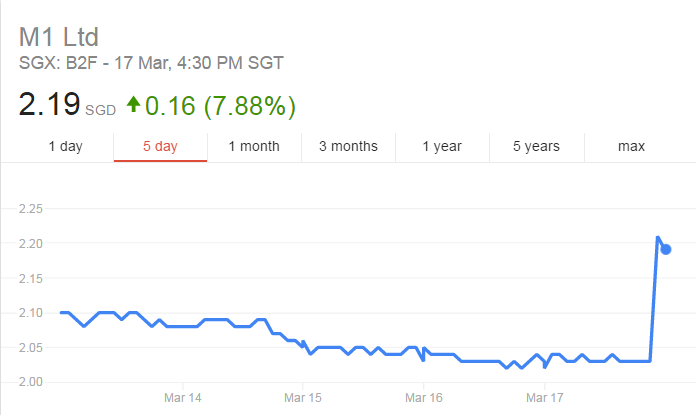 Noble, one of the world largest commodity firms, has been featured on this column recently. This was when it was an upward trajectory, reporting narrowing losses for 2016 as well as possible interest from one of China’s largest companies, Sinochem.

This was followed by another poison pen from Iceberg Research, which has been releasing scathing attacks on the company since early 2015.

On Wednesday (15 March 2017), Noble announced that it would consolidate 10 of its shares for 1 share in the group. According to the company, this was to reduce volatility and improve liquidity.

On the back of this announcement, investors did not respond with enthusiasm as Noble shares fell on Thursday (16 March 2017) For the week, Noble declined over 2.9% from $0.205 to $0.199. For the year-to-date, Noble has still performed well, returning 17.1% to shareholders. However, over the past 52-weeks, the stock has shaved off close to 38.8% of its value. 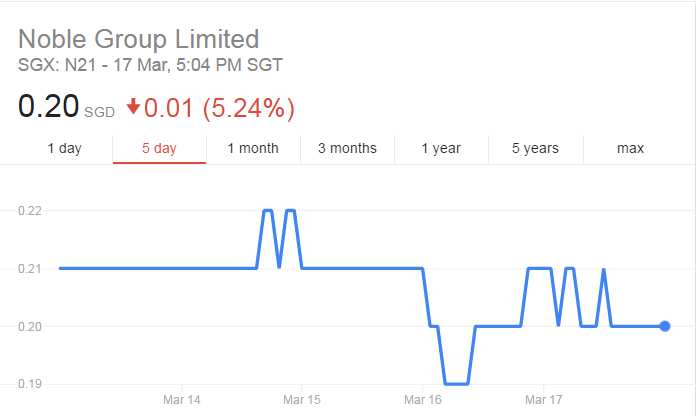 Compared to the other stocks listed on the column this week, Hock Lian Seng is not as well-known. What’s interesting, however, is that the civil engineering company is trading at record high levels.

The driving force behind this company is its strong track record of government projects including those for the Changi Airport, MRT stations expansion, expressways and other industrial property development projects. In addition, the group has a strong order book over the next few years to sustain its growth.

As at 16 March 2017, the company has a net cash holding of $190.2 million. This is 61.7% of its market capitalisation. The company has also seen a strong 29.2% year-on-year increase in its earnings per share. The company’s dividend yield is also hovering at close to 3.9%. 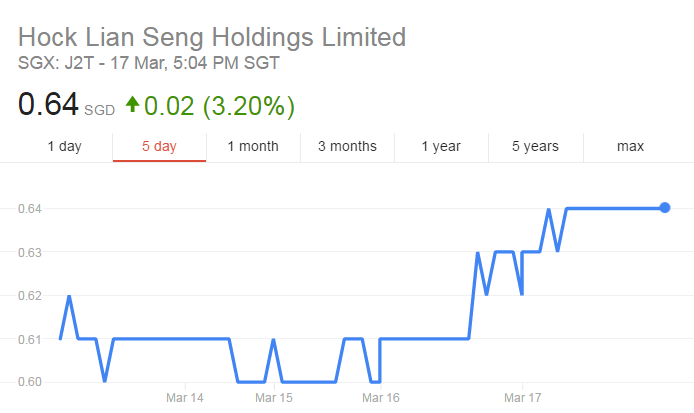 On Friday (17 March 2017), Singapore Airlines (SIA), along with 10 other airlines, were fined $1.2 billion by the European Union antitrust regulators for their participation in an air cargo cartel from 1999 to 2006. For its role, SIA was slapped with a $112 fine.

This roughly translates to 13.2% of its 2016 net profit. Also, as news of this came out only after markets closed, investors can expect to see some volatility in its share price on Monday as the market absorbs the fine that will make a one-off impact on its bottomline this year. 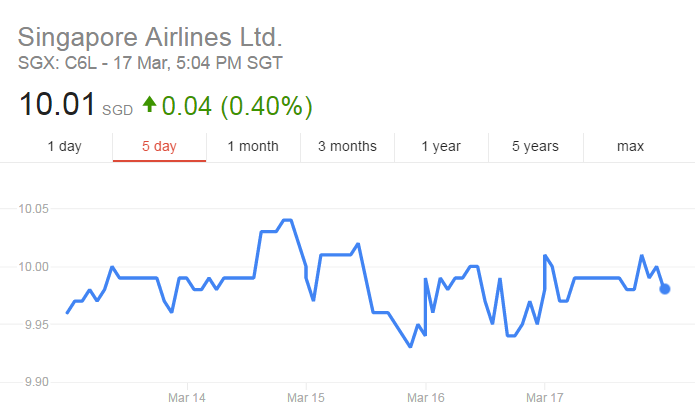 Apply online for any of these five selected credit cards from now till 30 March and receive up to an additional $100 NTUC or Takashimaya Vouchers for your online application. To find out more, visit this link.