We look at the performances of Ezra Holdings, Thai Beverage, Sabana Industrial REITs and Jardine Matheson

As we head into the second month of the year, our 4 Stock This Week column continues to focus on companies that have recently released their results.

We always encourage your inputs. If there are other stocks you are looking at right now, let us know the reasons that make the stock such a noteworthy one. You can do this via our comments section after the article or on Facebook.

Diving into this week’s showing, the Straits Times Index (STI) was only open on four days as we celebrated Chinese New Year. On three of the four occasion, the STI closed in the red and on a weekly basis, it was mostly flat, down 18.75 bps or 0.6%.

The U.S. continues to dominate the global socioeconomic with Trump’s latest immigration ban. Subsequently, a court order suspended the ban, and ultimately, no one really knows where this is headed next.

Overall, the STI still remains healthy this year, up 5.6%.

Ezra has had a tough year operating in the weak global oil & gas market. On 11 January 2017, it applied seeking extensions to certain corporate actions, one of which was a 30-day extension for the release of its 1Q results.

More recently, it had applied for a trading halt on 1 February (which is why we are showing its 1-year share price chart rather than its 1-week chart below). This was due to what Business Times termed as a “massive impairment by Ezra’s subseas JV partner”. Taking into consideration the writedowns by its JV partners, the company’s solvency may be at risk.

With the 2016 full-year results already taking a hit of over US$370.3 million in writedowns, and incurring a loss of over US$887.8 million, it is difficult to see any bright sparks for the company in 2017.

The company’s share price closed at $0.048 on Wednesday (1 Feb 2017), the same as when it opened for the week on Tuesday. Looking at a longer term horizon, it has lost close to 7.7% of its value over the past one year period. 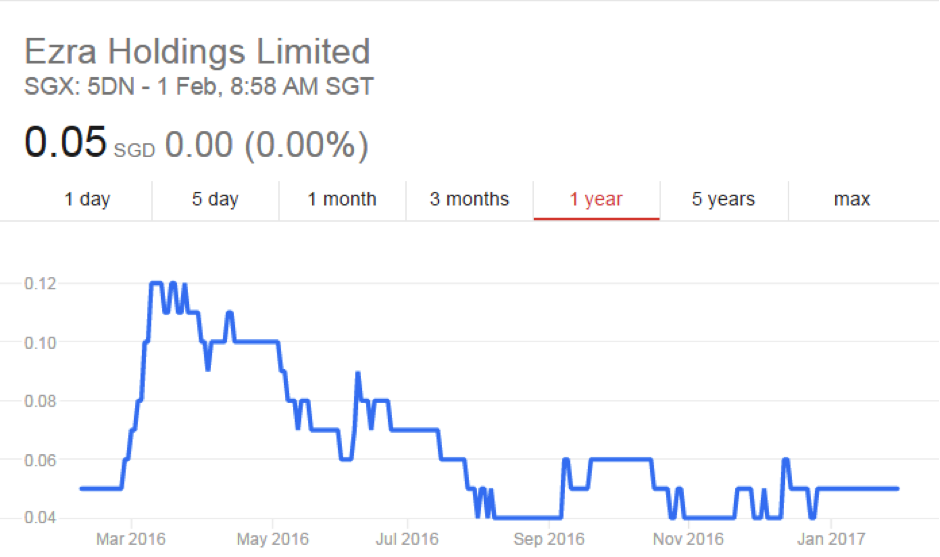 Serving up beers, other alcoholic, non-alcoholic beverages and food, Thai Bev is one of Southeast Asia’s largest Food & beverage companies.

Backed by its vision 2020, the company aims to achieve THB300 billion in revenue by 2020. The group bought over F&N back in 2013, and should it continue this strength in acquisition, it should be able to achieve its targets.

Also Read: 5 Sectors Within the SGX That Beat the STI in 2016 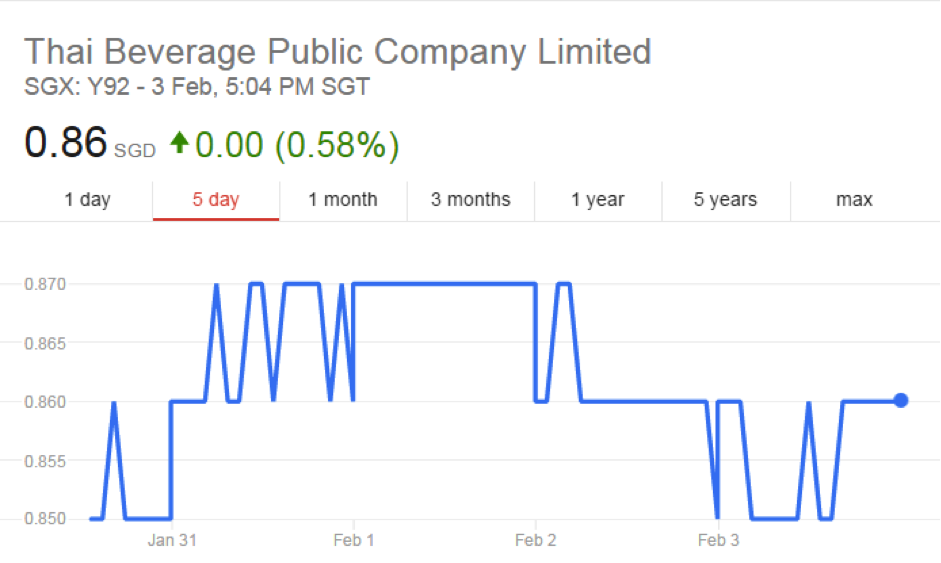 On Thursday (2 Feb 2017) Sabana REIT, along with its sponsor, announced that it would be undertaking a strategic review of its operations.

Coming after disgruntled shareholders were in favour of firing the managers over its poor performance in late January, the management conceded it had performed poorly compared to its peers. This comes on the back of another company, International Healthway Corp, that recently saw unhappy shareholders boot out its executive management team.

Looking at its 1-week share price chart, the REIT has increased its value by close to 10.4% to $0.425 on Friday (3 Feb 2017) from $0.385 on Tuesday (31 Jan 2017). While this seems like great news for shareholders, its 1-year price chart actually paints a drastically different story – losing over 18.8% of its value, even after taking into consideration its share price rebound this week. 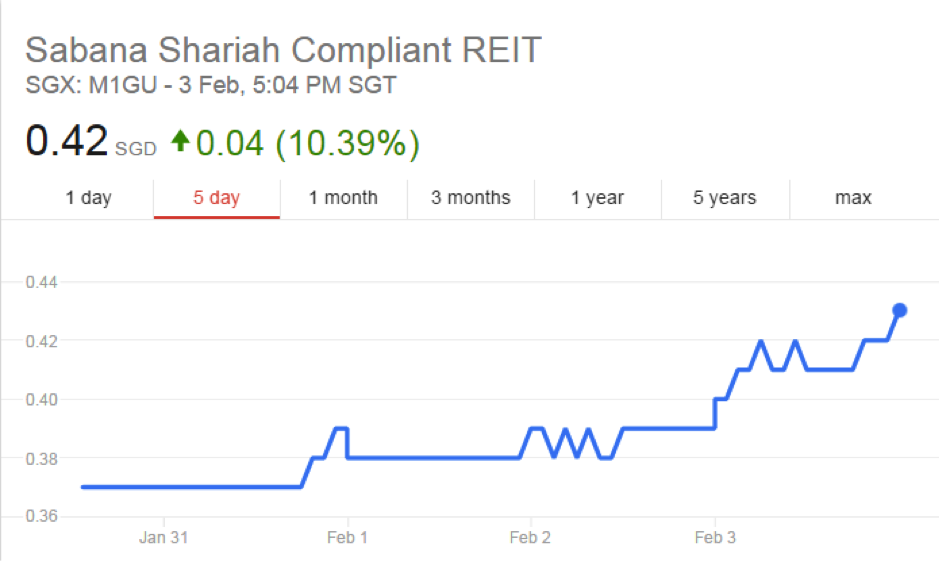 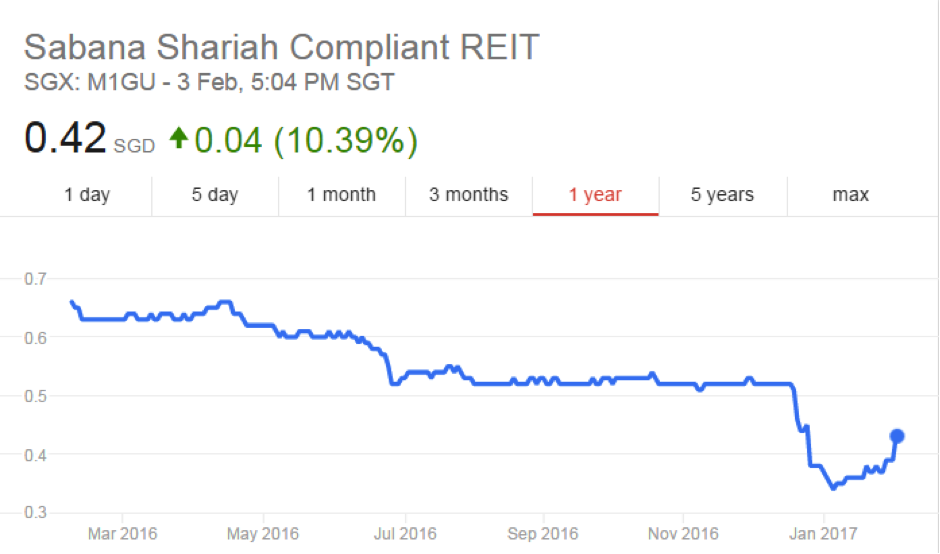 Added back to the Straits Times Index at the tail end of 2016 after being removed from it at the end of 2015, Jardine Matheson Holdings certainly has an air of mystery around it. Should we love it or should we avoid it – even the STI cannot decide.

Jardine Matheson Holdings itself is a conglomerate with businesses in the property, motor vehicles, retail and restaurants, insurance broking and financial services, engineering, construction & mining contracting, hotels and other industries. 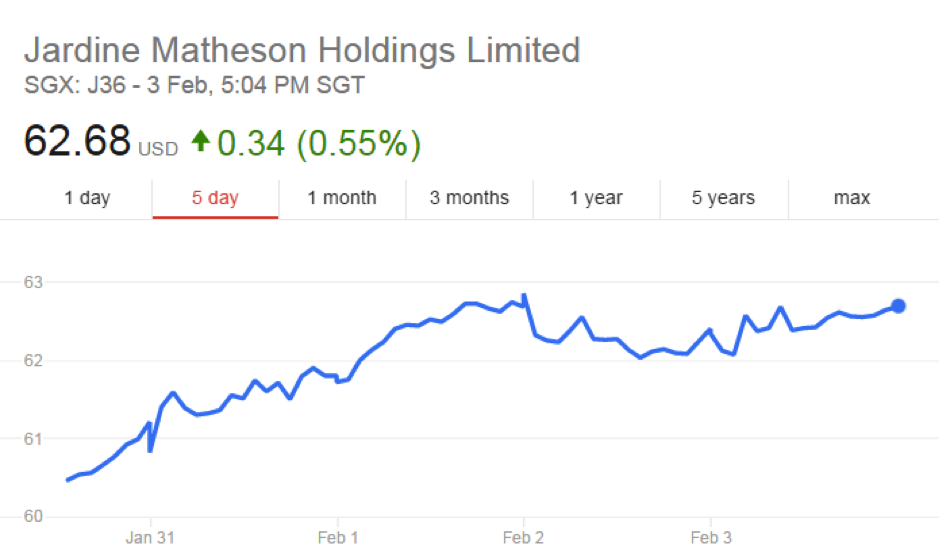 5 Investments In Singapore That Caters To Every Investor’s Risk Profile
The Art Of Diversification: What You Should Know If You Want To Diversify Your Investment Portfolio Effectively