Looking to invest in China Tech? This (all-in-one) technology stock may be what you’re looking for. 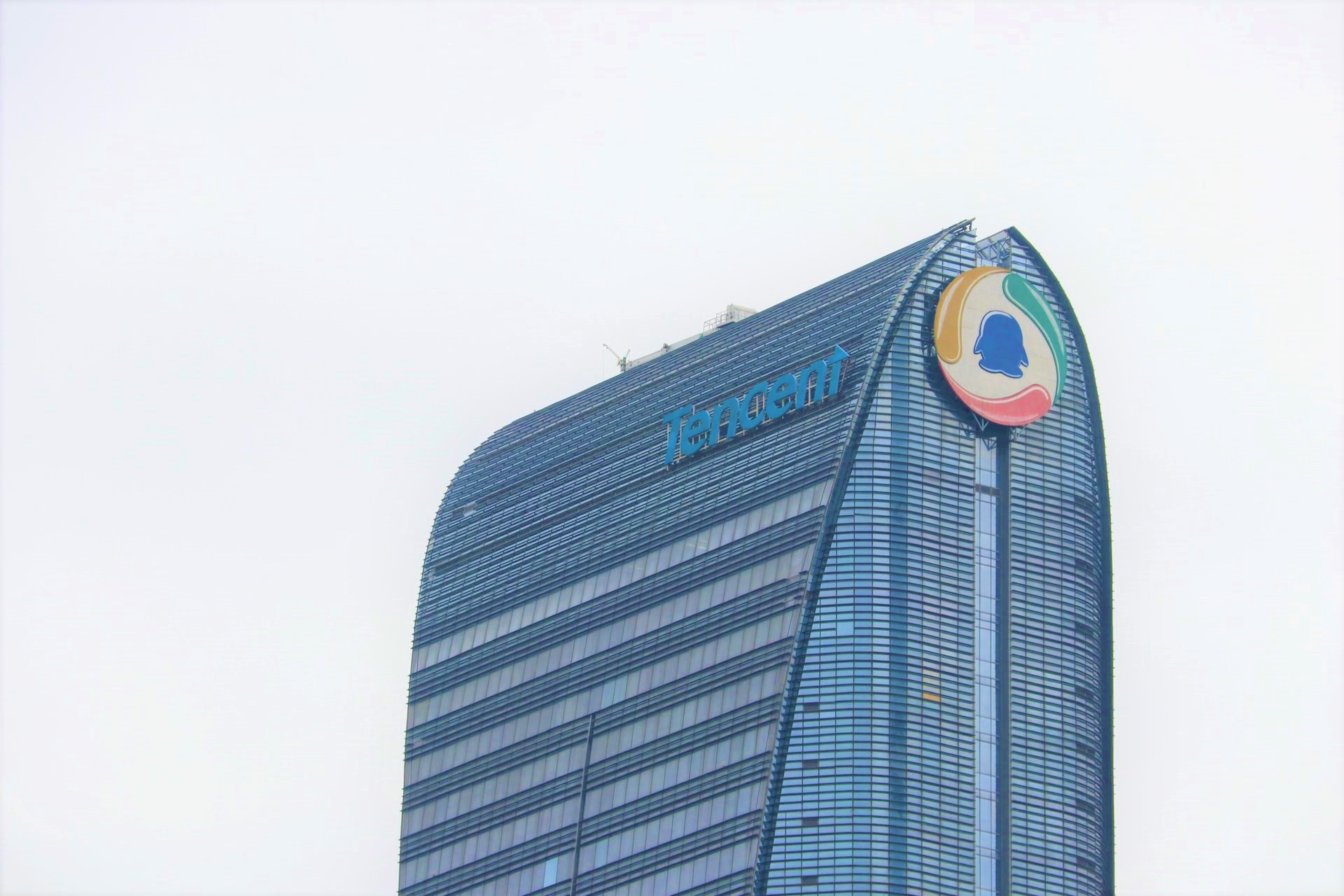 Most of you would have heard of the company Tencent (HKG: 0700), but do you know what it actually does?

What if we tell you it’s all of that and more!

No doubt, Tencent is not an easy business to dissect. Nonetheless, as stock investors, it is important for us to deeply understand the business behind every stock we invest in.

Today, let’s dive into the business of Tencent to truly understand what’s behind this, as we would like to call it, all-in-one tech stock.

Read Also: Stocks, ETFs Or Mutual Funds? How Singapore Investors Can Invest In Chinese Stocks Such As Alibaba, Ping An And PinDuoDuo

Founded by Pony Ma in the city of Shenzhen back in 1998, Tencent’s early days were focused on building internet communication tools, from Ma’s initial pager idea to the popular QQ platform. 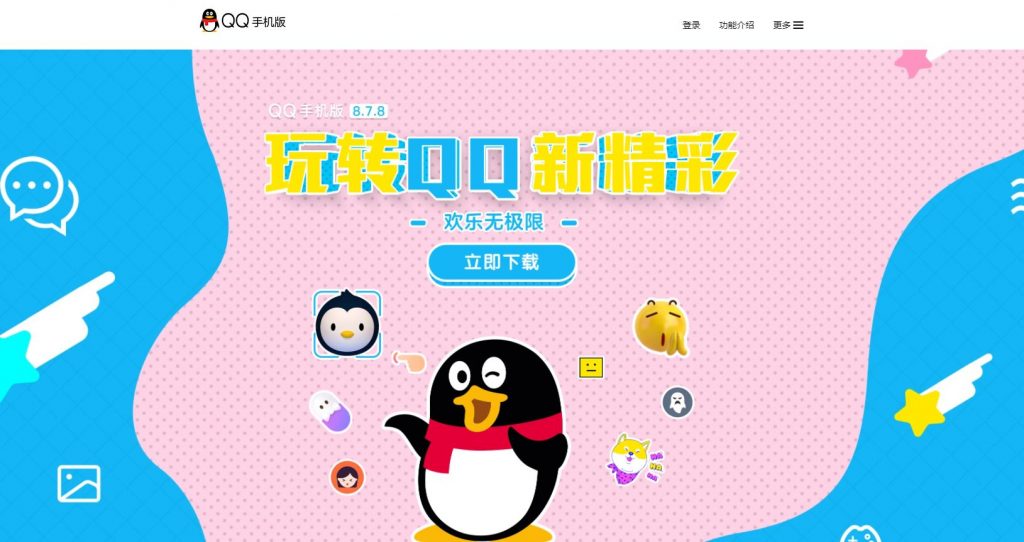 Like your typical rags to riches stories, Tencent had its fair share of struggles, almost dying just 1 year into founding. Thankfully, capital from some investors managed to pull the company through. Since then, the company has evolved into a massive tech monster with its feet in many areas.

Tencent is often known for WeChat, china’s biggest social media platform, but perhaps to the surprise of some, that actually isn’t the bulk of its business.

Gaming is, generating almost 1/3 of the company’s revenue. In fact, Tencent is the world’s largest gaming company by revenue, recording US$30 billion in 2020.  Tencent owns multiple games which are ranked among the top globally. Some examples include the popular League of Legends, Valorant and PUBG Mobile. 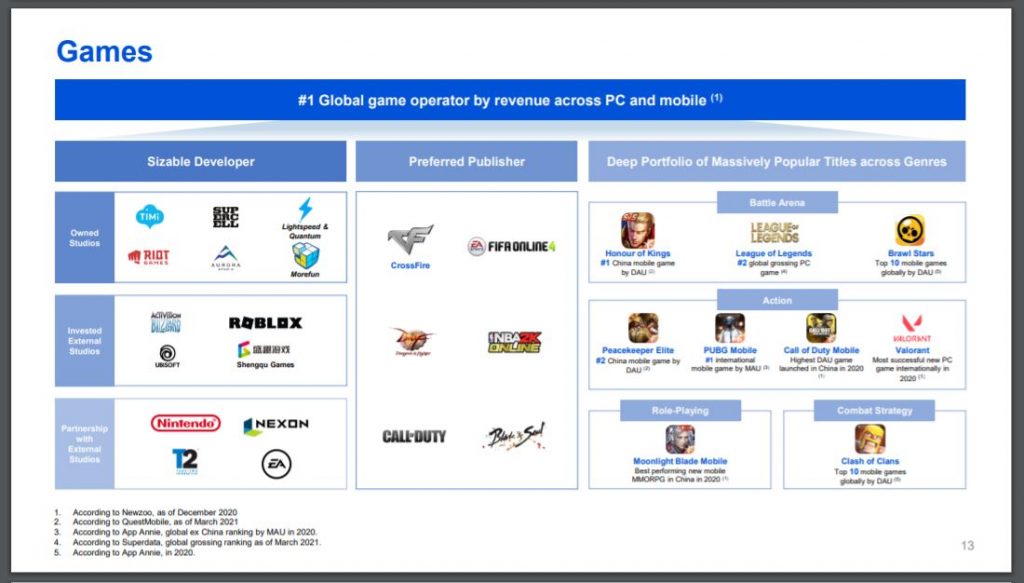 While the gaming industry is not one with significant barriers to entry, Tencent holds a competitive position through its wide portfolio of some of the most globally recognised games. Besides holding strong brand power, some of these games possess a network effect.

*A network effect is present when increasing usage of a product or service makes it more valuable for users. Facebook is an example of a company that leverages on network effect.

In this case, more people playing such games lead to greater appeal of the game, which in turn leads to more players joining and the cycle continues.

At the same time, Tencent has an amazing track record of success in developing (and acquiring/partnering) highly popular and long-lasting games that are very well-received by gamers. This strong industry expertise and culture of innovation is an added competitive advantage they possess which should allow them to continue maintaining their lead in the gaming space.

What we like about Tencent video is that besides having its own original shows (similar to Netflix), Tencent is able to leverage its existing intellectual property (IP) for content production.

A good example of this is how it uses its existing China Literature IP to produce popular drama series. This is somewhat similar to how Disney uses its existing Marvel IP to constantly produce new shows that its audiences want to watch.

Tencent is a clear market leader in music 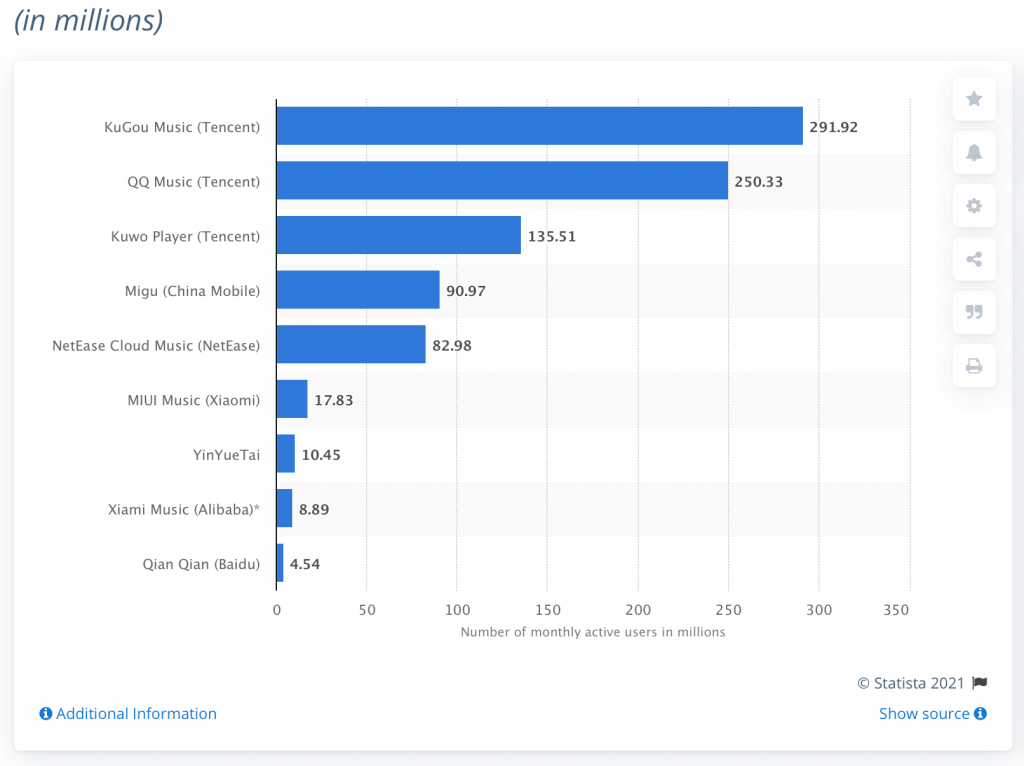 To give some comparison, Spotify reported 356M monthly active users (MAUs) in its latest quarter.

And guess what? More than 1.2 billion people are on Tencent’s WeChat social media platform. Or as the Chinese call it, Weixin. 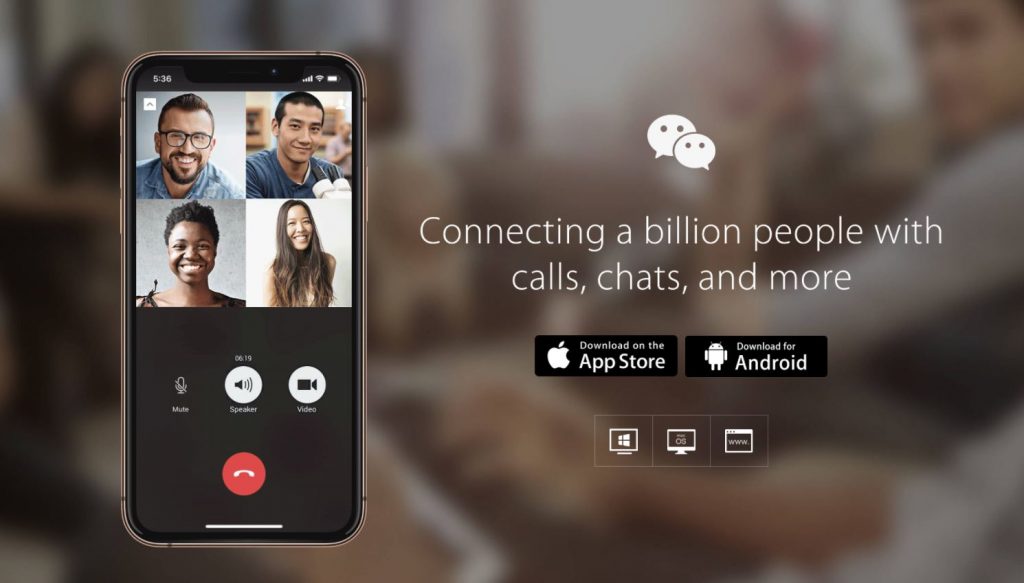 The concept of a network effect applies here as well. With almost everyone already on WeChat, you have no choice but to use it if you want to stay connected with your friends and family. This huge user base is, in our opinion at least, Tencent’s greatest asset. Tencent can leverage on it to dominate in its other businesses, beyond just social media alone.

You simply can’t live in China without WeChat

Tencent’s launch of mini programs back in 2017 further strengthened WeChat’s indispensability in China.

Mini programs are applications within the WeChat platform that users can access without having to download anything. You can think of it like opening a webpage on your browser except this is the app version and everything happens on WeChat.

This amazing innovation has brought about many new services and functionalities.

Oh and before we forget, WeChat is also the most used payment platform in China. 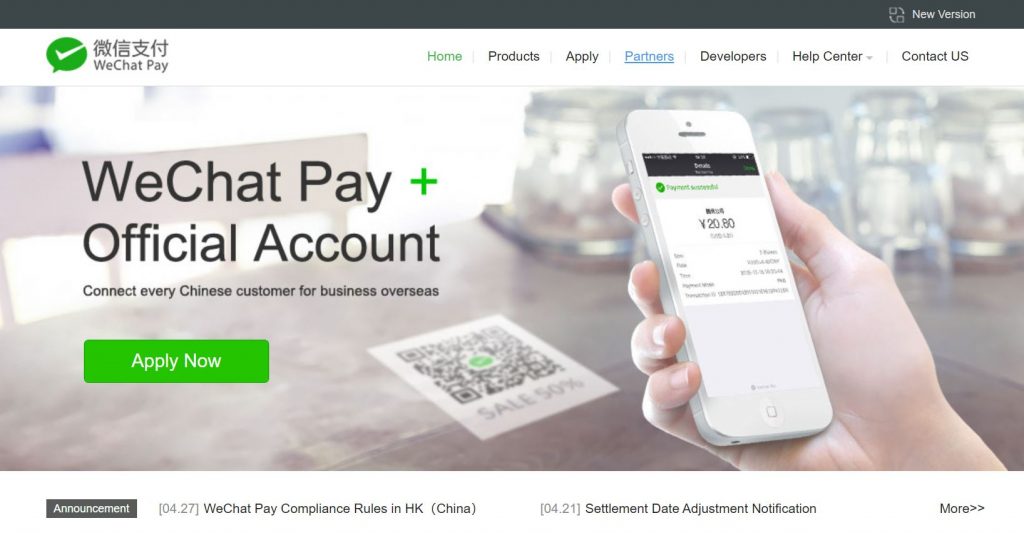 In China, you may be judged for using cash or credit cards. It’s either AliPay or WeChat Pay.

As you can see by now, the multitude of services offered on WeChat has greatly transformed WeChat from a simple social media and messaging app in China to an essential lifestyle app.

As Tencent conquers the consumer market, it is now going for enterprises

Taking on the industrial internet market, Tencent is riding on the secular growth trend of digitalisation where more and more businesses are realising the importance of going digital (accelerated by the Covid-19 pandemic) and hence adopting the use of products or services that can take them digital.

Many businesses have realised that being digital is no longer a good-to-have, but a must in order to stay competitive in the business world.

This is alongside the additional tailwind of the Chinese Government’s proposed investments into the digitalization scene according to the country’s latest 14th Five-Year Plan.

While Tencent is in a far 2nd place compared to Alibaba who currently holds the dominant position in China’s cloud infrastructure space, it is worth noting of Tencent’s advantage in that it is able to provide businesses with integration to its other services.

This was highlighted by Tencent’s president Martin Lau in the company’s 2016 Q4 earnings call:

“Now, in terms of cloud, we believe that at this point in time we have a lot of internally developed technologies which we can actually sort of package into the cloud and share with the broader community and ecosystem. So, if you look at for example, we are the leader now in gaming cloud as well as in video cloud. And the reason we were able to actually come from behind and sort of took the leadership is because of the fact that we have a lot of core technologies in those fields, which we share with our ecosystem. And over time, we’re going to package more and more of our service — our technologies around big data, around scalable system, around security, and mini-programs, payment platform in order to benefit cloud customers.” 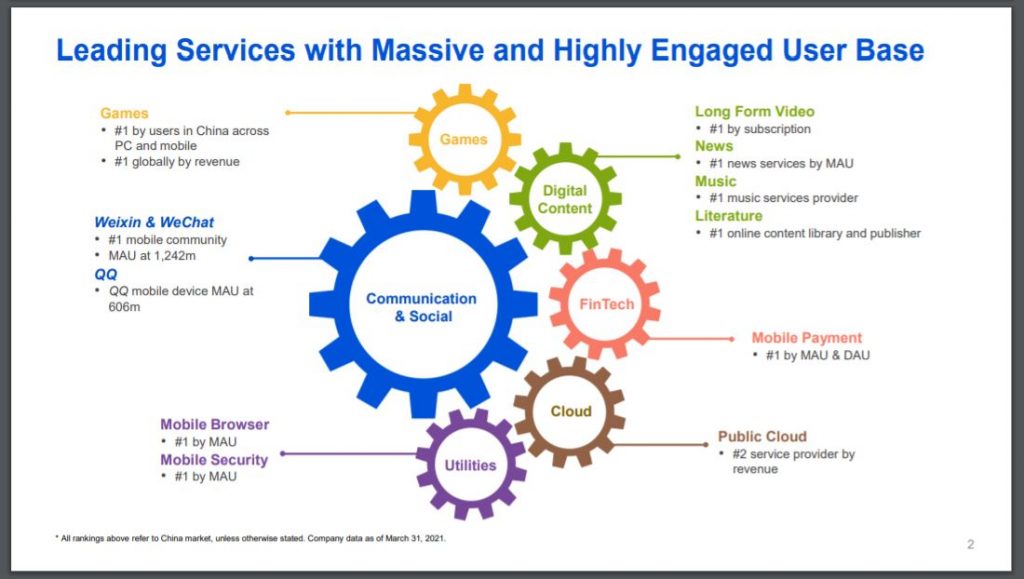 If we have to truly describe it, Tencent is a combination of many companies like Activision Blizzard, Spotify, Netflix, Facebook, Square, Microsoft, and now increasingly like Shopify as well. Tencent is a one-of-a-kind company and it comes as no surprise that it is currently the most valuable company in China in terms of market cap.

Read Also: ARK ETFs: What Are They And How You Can Invest In The Biggest Disruption Trends Globally

Disclosure: I am an independent investor and not a certified financial advisor. All information presented is for entertainment and educational purposes only and should not be taken as financial advice or any form of recommendations. I currently hold shares of Tencent, Microsoft and Facebook. Holdings are subjected to changes.